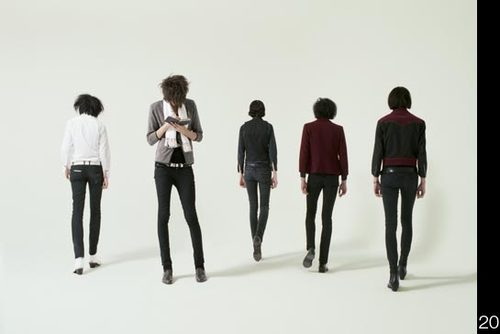 Last month’s BOTM London’s very own TOY took to the stage with around 30 or 40 people at the barrier, the sound took a while to get right as Tom Dougall’s signalled for more vocals and louder guitar which only came into effect the second song in. Vocals were a little distant but the music remained strong and the melody cut through. TOY suit a big stage as they are a band that have plenty for an audience to take in, they look good and the sound is hypnotic and euphoric. A drunken Manchurian did not feel the same rush of excitement during their set as he lobbed an empty beer can off bassist Panda who took it with a little chuckle. The drunken layabout consequently got himself thrown out. Result. TOY currently have a free 2 track download of their single ‘Left Myself Behind’ and ‘Clock Chime’. A cracking band with only great things ahead.

HVN233 – TOY ‘Left Myself Behind’ & ‘Clock Chime’ by heavenlyrecordings

With the crowd evidently more busy we made our way as close as possible to see Alison Mosshart appear with red streaks in her hair. We’re not sure why but we shrieked and panicked, what has she done, the dark, powerful, mysterious beast has changed colour. Not to fear as soon as they started playing we were fixated on the music. The sound was much stronger and The Kills always manage to put on a show which make you feel part of it. Opener ‘No WoW’ was incredible with its itchy flickering back beat. The big surprise of the night however was not Alison’s hair but when four drummers took to the side of the stage to play simultaneously making one hell of a racket as well as a brilliant visual performance throughout half of their set. They played the hits from the last two records but the unexpected one for us was the finale of ‘Fuck The People’…it’s been a long time since we heard that one live and it felt amazing.

Here’s their next single, Baby Says live at the Henry Fonda via the Carson Daly Show.

The Horrors took to the stage late into the night right when things we getting messy and the WHP was starting to feel like a maze. The psychedelic backdrop looked immense as The Horrors stood in darkness against the busy changing colours, their movements memorising. The sound washed over everyone beneath the railway tracks in a tidal wave of garage psychedelic rock. ‘Still Life’ and ‘I can’t See through You’ were epically sounding and stood up next to the brilliance of ‘See with in a Sea’.

As Faris bid everyone good night he introduced their last song ‘Moving Forward Away’…‘This is our last song…all fifteen minutes of it’. A brilliant night with three brilliant bands. WHP we think we’ll come back one last time…