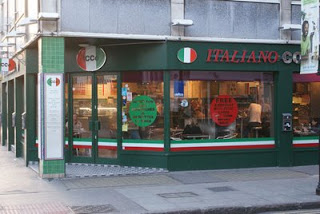 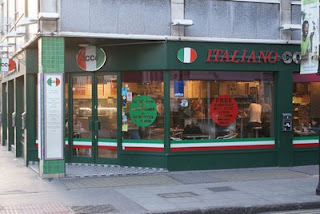 LondOnTheInside slicked back their hair, broke out the cracks in our leathers and wondered in on a quiet Sunday night chewing on a tooth pick. It was filled with other dinners a nice enough atmosphere in a pretty part of town…our town, and we weren’t going to let anyone move in on our pizza.

We ordered a Hawaiian with extra onion and sweetcorn and a Vegetarian with Jalapeños. You’re given a pager which goes off when your orders ready so you can collect from the counter at the front. Drinks are bottled in a chillier, there should be a soda stream in there and a beer or two would be nice but hey this is London not New Jersey. Less than a ten minute wait we were prepared with chilli oil, chilli flakes and garlic oil (a few more bottles of which would go down well) to drizzle and shake all over the light thin crispy pizzas, badda bing badda boom.

So how was it? The cheese was stringy as it should be, the toppings were evenly spread, the tomato base was tangy and although we’re normally in favour of a deep pan the thin and crispy was a treat. An authentic Italian/NYC pizza joint where you can pick up a decent sized pizza for a fiver.

The girlfriend ate my last slice but hey Whatyougonnado!