We were desperate to catch the next band…Esben and the Witch and they didn’t disappoint. Their brutal sound was matched with hypnotic and spontaneous movements. Everything about this band is haunting from their lyrics to their image. Their use of beats and loops means they can create a huge noise and the interplay they have with all three members bashing out rhythms on the same floor tom is brilliant to watch. ‘Marching Song’ came across as one of the highlights and we will definitely be checking them out again soon.

Over to the John Peel tent we were there to see what all the fuss was about over Foster the People and what we found was it was a waste of our time, still an excuse to get another beer. Trenching along in the almost dry mud (result) we were excited for Two Wounded Birds at the BBC Introducing stage. Johnny Danger ran onto the stage and spoke ‘Hihowyoudoingalright’ into the mic as fast as he came on. They opened with ‘Summer Dream’ and straight into ’All I Wanna Do’ and from only seeing these guys in the Ray Ban bus at the Camden Crawl the rawness from the amped up set was electric. Songs were fast and delivered with conviction and passion with the surf vibe cutting through their modern pop sound. A great band we could watch time and time again.

Back over to John Peel Egyptian Hip Hop were looking bewildered on stage. Our debut viewing of EHH was not a pleasant one. Being a fan of their music we were looking forward to seeing these guys but they took forever to actually start play their first track and look amateurish and sheepish on stage before hand. Disappointed to say the least.

Back on the hard ground at the Other Stage Bombay Bicycle Club were churning out their indie hits including our favourite ‘Dust on the Ground’ and new single ‘Shuffle’ which more than please the crowd. TV on the Radio took to the stage soon after and we were ecstatic to watch them perform ‘Wolf like Me’ and ‘Staring at the Sun’ which made the crowd stand on their feet and jump around.

As thing once again began to get a little hazy we caught Eels rocking their blues inspired music and made a mental note to check out more. Queens of the Stone Age stole the show with an amazing set that included so many good songs, Josh Homme tormented the crowd and made jokes about Beyonce (don’t get me started) which received boos and laughs. It may not be the original line up but man does it sound just as good. ‘Little Sister’ and ‘Know one knows’ were our favourites… 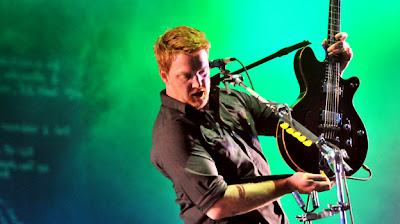