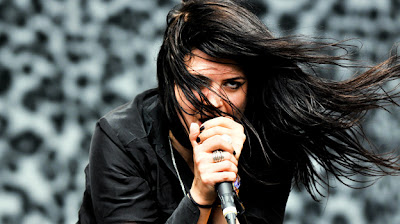 Opening with ‘No Wow’ they were in full swing, like a growling leopard waiting to pounce Alison Mosshart was throwing her long black locks around her face like a demon possessed. The Kills nailed it, they captured enough energy to eradicate any hangover playing plenty from their newest LP ‘Blood Pressures’. Fan favourites ‘Kissy Kissy’ and ‘Fry My Little Brains’ made appearances. Jamie Hince climbed aboard his amp, slaming the head into the speaker to make it grind and push out noises that normally come from motorbikes. They certainly put on an epic show, they owned the stage and everyone watching was just in ore. Just two people and a fever for rock n roll…they gave Primal Scream a run for their money!

Over to the John Peel tent we were back in the mud, it was going to well! The Horrors walked out to a rapturous reception and opened with ‘Sea within a Sea’ an amazing first song which set the pace for the rest of the set. Current single ‘Still Life’ went down a storm and they crooned around the stage just looking cool and content.

We picked up White Lies half way through their set back over at the Other Stage, who were smartly dressed and in full flow. ‘Death’ sounded amazing with their light show and smoke. The sun was going down as the band ended on their last single ‘Bigger Than Us’

The Chemical Brother lights show is something else, the crowd went mad and swayed as green laser beams circled the stage like an alien space ship. They played a mighty set including our favourite ‘Setting Sun’. We rolled in late that night!