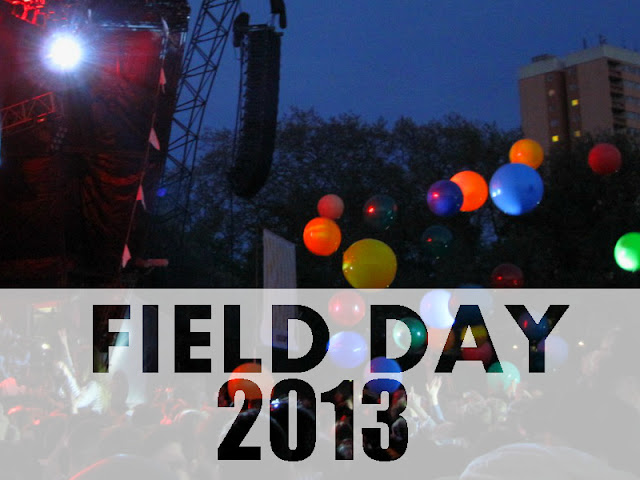 The festival this year feels much better, with it being more popular it has grown and it feels bigger, more bars, more toilets, more food, more everything. We thought we’d bring you a review with the aid of pictures and some of the highlights throughout the day including Charlie Boyer and the Voyeurs, who happened to snap a string in the first song, but this did not hinder them, nor did the heckles of ‘show us your eyes’ from some party goer aimed at two members of the band sporting eyewear. They did indeed raise their shades for a brief moment to the bemusement of the audience. It was quite notable that their keyboard player was in desperate need of a belt…nice boxers. Cracking set though.

Spalshh delivered their dreamy indie haze to a packed out Shacklewell Arms tent with Vacation getting quite the Woo Woo’s, another emerging London band on top of their game. Stealing Sheep made the sun shine with their Beatles-esque melodies and glitter to a huge crowd at the EYOE stage. Most people seemed to be very excited for Solange and the applause erupted when she walked on stage and over to the backing singers mics, ‘huh!’. That girl was the spitting image. Still it shows that ‘the moves’ definitely run in the family as people began to get in to the groove.

Savages captured their aggressive sounds in a mix of smoke and feedback with drummer Fay Milton absolutely killing it, a well impressive performance all round ending in ‘Husbands’, and one of our favourite performances from the day. Toy smashed it in a sea of hair as the psychedelic rockers hypnotised the crowd to a truly awesome show. We caught a glimps of Animal Collective in their luminous stage that seemed to glow in all manner of hues of purple and yellow…it was time to leave.