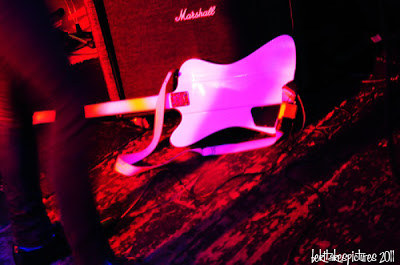 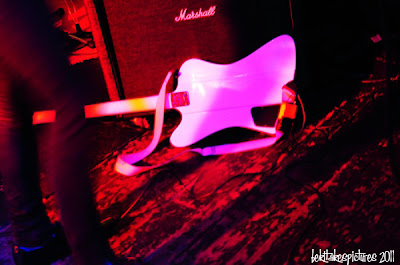 Headlining this week were the 1914’s; a post-pop electro three-piece who managed to simultaneously sound futuristic and nostalgic for early 1980’s krautrock. An energetic, charismatic masked frontwoman holds the attention, flanked by a guitarist and a synth player providing a swirling soundtrack. As for their name – your guess is as good as mine.

Supporting them were The Jons, five exuberant young men perched somewhere between ladrock and old school Oi! punks like the Cockney Rejects. They’d clearly brought a strong following with them from their hometown of Southend, the front row sung every word right back to them. It’s refreshing to see people having so much fun on stage and playing with wide grins – these guys were having a ball up there and loving every minute.

The highlight however was the second band of the evening, YourOtherLover, sandwiched between the Jons and the 1914s like the meat in a particularly delicious sandwich. They have the image, attitude and stage presence of a band that have been on the scene for years; jeans so skinny they could have been painted on and more wrinkled vintage leather than Cliff Richard’s face. These guys have clearly been worshipping at the altar of the Jesus and Mary Chain and raised on a diet of Joy Division and Interpol, all fuzzed-out distortion and bass strong enough to beat you in an arm wrestle. Definitely one to watch, keep your eye out for Your Other Lover. We certainly will.