The atmosphere in the venue is that of an old time speakeasy, with a DJ playing jazz classics and waitresses dressed in classic 1940’s style. Even the clientele make an effort with an emphasis on glamour and sophistication. Kicking off the event, we were presented with a selection of dainty finger sandwiches. Containing a variety off fillings, we sampled Parma ham, coronation chicken, egg mayo, cheese and onion and cucumber and cream cheese. Presented on varying types of bread, the contrast between them was as pleasant as the fillings themselves.

Of course, being afternoon tea, a heavy emphasis is placed on the drinks. If you’re a traditionalist (or nursing a hangover), you could try a traditional tea, but we opted for a pot of refreshing, fragrant Earl Grey. Alternatively if you’re feeling a little more naughty (and who could blame you in this atmosphere), cocktails based around tea are served in teapots. We tried the ‘From Russia With Love’, a punchy cocktail of black coffee, vanilla Stolichnaya, Kahlua and Cointreau. Served hot, the orange notes of the Cointreau come through straight away, followed by a strong caffeine kick. 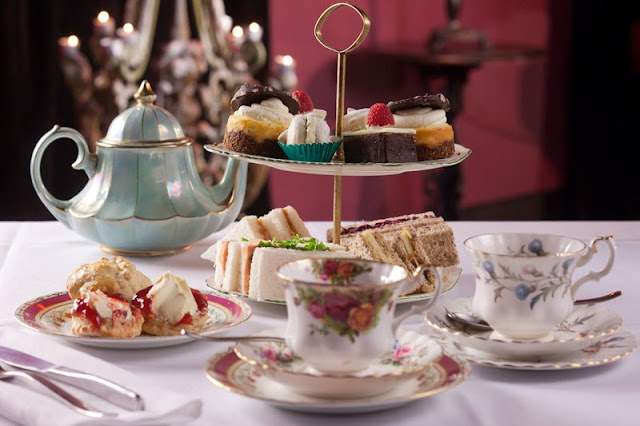 While we enjoyed our cocktails, the entertainment began. Compered by the delectable Tempest Rose, the set kicks off with her interpretations of modern pop songs in a sultry jazz style. While she keeps her clothes on, the following acts most certainly do not. Dolly Rose is a storytelling performer, using mime and suggestion as part of her striptease, followed by the vivacious Honey Wilde, voted one of the top 100 burlesque performers worldwide with a playfully cheeky reveal taking us into the interval.

The break was the signal for us to receive the second course of our tea, consisting of fresh scones (some plain, some delectably dotted with pistachios and raisins) with clotted cream and jam, plus a selection on patisseries including double chocolate cookies, marshmallow rose macaroons and butterscotch poppy seed cake. The portions are large, with us struggling to consume all the treats between us. Although we’re pretty sure that clotted cream and cake do not constitute health foods, today is all about being a little bit naughty, so leave your food hang ups at the door. 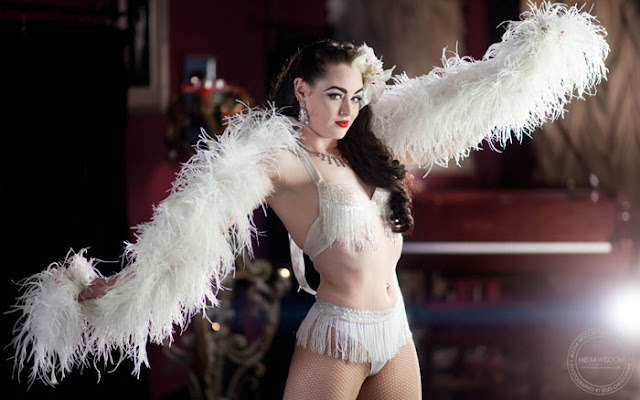 The second half of the show starts of with more songs from Tempest Rose, a second tease routine from Dolly Rose follows, who proves herself to be a very talented dancer before the highlight of the afternoon, the second appearance of Honey Wilde. Entering the stage dressed as Margaret Thatcher, she mimes the famous ‘This lady is not for turning’ speech before seductively disrobing, save for a Conservative rosette conserving her modesty. Who says the Tory’s don’t know how to have fun…

Tickets cost £42 for tea and the show and are worth every penny. With first rate acts and tea as delicious as we’ve had anywhere in London, this is a truly remarkable afternoon that would be the perfect way to celebrate a birthday, engagement or other special event. Afternoon tea is good, but afternoon tease is much, much better.

**Special Fundraising event…
Charity begins at home on 26th April with a fabulous fundraiser for The Albert Kennedy Trust at Volupté. Raising money for the cause the only way they know how – cabaret, old chum! – join them for an evening of epic entertainment with singing sensation Beverly Stone taking to the stage and 50% of proceeds donated at the end of the night. There’s also a new cocktail for the occasion, the Marilyn Monroe, with £3 for every one sold also going to the charity. Book tickets here