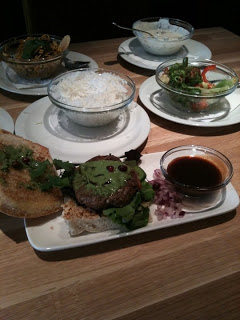 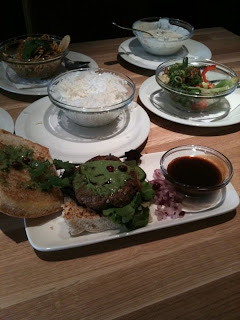 Like other Indian Street style joints the food is served in sharing portions, as and when it’s ready (no starters and mains here folks!). We ordered quite a feast; Bhel Puri, Hakka Chilli Paneer, Veg Samosas, Bun Kebab, Raita and Tarka Dhal. The paneer just as the menu said was fiery, coated in a spicy sauce with spring onions and peppers on a bed of lettuce. The Bun Kebab, spiced lamb chapli pattie was a juicy Punjabi burger style dish served with a portion of sticky tamarind sauce in a bun. Two thumbs up!

The Vegetable Samosas were stuffed full of pea and potato with a hot kick that left us reaching for cooling Raita. The Tarka Dahl was another great dish as was the Bhel Puri, puffed rice with chopped onions and tamarind sauce however much it did remind us of rice krispies.

For dessert we opted to try a Pistachio Kulfi and Chai Tea. The Kulfi was incredibly creamy and smooth with a slight pistachio flavour where as the chai was more like a tea than other chai we have tried although we have to admit we actually prefer a creamier chai.

We left Roti Chai stuffed and satisfied, in fact we’re already planning our next trip back. Prices aren’t bad either with dishes starting at £3.80, which given the location is a steal. If finer dining is your thing then you’ll be happy to know that there is a posh restaurant in the pipeline, planned for the basement area.

Check it out people!