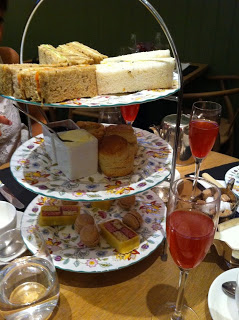 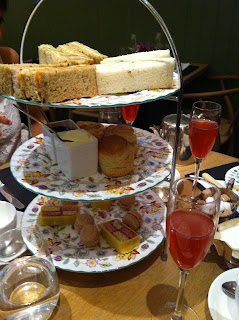 We went along to try out the afternoon tea last week, fighting our way through the protester’s tents to get to the doors…OK so not really fighting, in fact we actually just walked around them and straight into the cathedral. But fighting sounded more dramatic. It’s impossible not to be impressed by St Paul’s, we challenge anyone to find a restaurant with a better entrance. We certainly can’t think of one.

Down in the crypt the restaurant is fairly small with a mezzanine level which is slightly more formal than the tables at the entrance. Afternoon tea comes in two options; £15.95 or £21.25 including a glass of fizzy English rose wine.

The tea consists of a round of the usual sandwiches – salmon, cucumber and egg mayo, a scone and a piece of battenberg and two small cinnamon macaroons. Everything is fresh and homemade which gets the thumbs up; the sandwiches were tasty and moist, the tea was hot and plentyful and the fizzy wine sweet but tart.

Personally we’d have preferred the scones served warm and perhaps as it was chrimbo they could have added a small mince pie in place of the macaroons which we noticed other people getting with their bills.

The afternoon tea ticked the box although it wasn’t the best afternoon tea we’ve eaten however those afternoon teas we not served in St Paul’s crypt and that’s the hook right there! A great place to take the nana or in laws, its bound to impress, “Boris you will never guess where Mark took us for lunch“.

Worth a go we reckon! Plus the fixed course lunch deals aren’t bad value either.