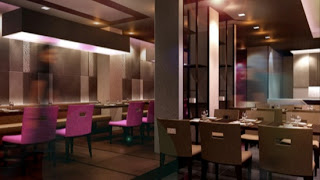 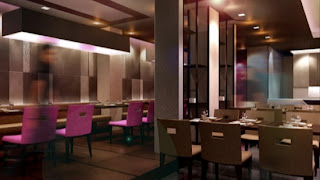 Inside the restaurant is dark, lots of dark furniture and not much natural lighting which makes it more suited as an evening location than a lunch venue. We started with a couple of the signature cocktails which took quite a while to come but were decent enough when they did.

To start we went for the Green Papaya Salad (Som Tum) and Hot and Sour King Prawn Soup (Tom Yum) two popular Thai dishes. The Som Tum was definitely one of the best papaya salads we’ve had in London, the papaya was crisp and fresh whilst the dressing was sweet and sour with an after kick that made of eyes water. The Tom Yum was another strong dish with a generous portion of King Prawns floating in a steaming bowl of well seasoned broth. Full marks for starters!

For mains we opted for pork sauteed with cucumber, pineapple and lychee in a sweet-sour sauce (Moo Krob Pad Praew Warn). We’re not sure how authentic this dish is as we’ve never come across it before but it worked well, the pork was tender and the sauce was sticky and sweet without been overpowering.

We also sampled the Pad Thai Koong, well we had to, it should be against the law to go for Thai and not try the Pad Thai! The dish was fresh and tasty, not the best pad thai we’ve eaten but by no way the worst.

LondOntheInside give ORA a big thumbs up, we’d definitely return however if you’re looking for a cheap Thai meal then you should probably go elsewhere. The starters come in at around £7 and mains around £13 – slightly more expensive than your usual Thai restaurants but worth a treat!