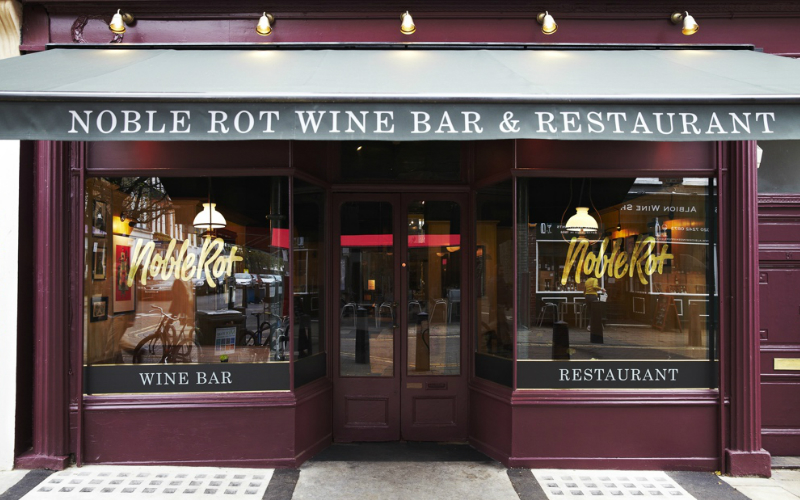 Noble Rot Wine Bar is on Lamb’s Conduit Street, one of London’s best enclaves of independent shops, cafes and boutiques. The site was actually already a wine bar and the building itself dates back to 1700, so there is plenty of cosy charm to the place and it feels as if they’ve been doing their thing here for years already. In the front are tables for drinking and snacks and at the back there is a slightly more formal sit down restaurant. Wine is of course as big a focus as the food and these guys know their stuff. We left all wine choices in the hands of our super knowledgable waiter and we got to try some really unique and unusual wines, from a champagne made in the southernmost part of the region to a dessert wine from 1985. We highly recommend this approach, it’s a great way to discover new things.

The food menu is the perfect match; big flavoursome dishes but nothing overly complicated or fussy. We loved the pork and walnut terrine, and the beautiful smoked eel with rhubarb and soda bread from the list of starters. It was hard saying no to the Comte tart in the mains but in the end we didn’t regret going for the huge saddleback pork chop with mash and apple sauce. We also had halibut braised in a very special Oxidised 1998 Batard-Montrachet Grand Cru. Get down there soon to check this one out, as once it’s gone, it’s gone! For dessert you can’t go wrong with a very satisfying warm chocolate mousse or the pistachio cake with blood orange and mascarpone.