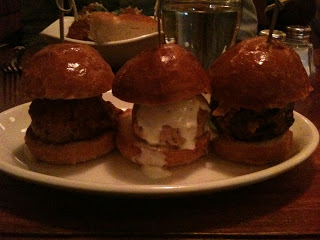 LondOntheInside like balls, big juicy balls – of the meat variety of course (get your minds out of the gutter people) which is why we were delighted to hear about Meatballs opening in Farringdon. 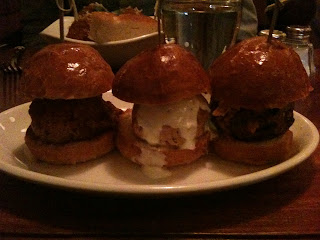 We went for what is possibly the trendiest dish in London right now – the selection of three sliders with one beef and ricotta ball, one chicken and chorizo ball and one courgette ball. The balls were juicy and soft, each one served with a different sauce to compliment the meat. We hate to say this but our favourite ball was actually the veggie one, a deep fried ball of soft courgette served with a mild curry sauce.

Another dish of beef and ricotta balls with spaghetti and tomato sauce was a generous portion, and as meatballs and spaghetti goes it was pretty darn good. We finished off with an Eton Mess which was a little too heavy on the cream and a large glass of the house red wine.

The decor doesn’t appear to have changed from its days as the Quality Chop House which isn’t necessarily a bad thing, however a few quirky touches here and there wouldn’t go a miss. Pricewise meatballs are under £4 for three, sliders are less than six quid for three and a spaghetti and meatballs comes in at around £7. Desserts are just as cheap and the cocktails and wines aren’t bad value either.