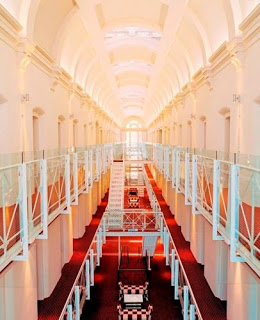 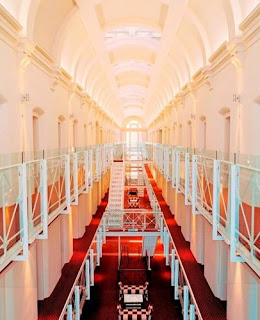 We stayed in one of the original cell rooms in A wing, which still has the metal balconies, railings and walkways, even the rooms  have the old cell doors. And where a cell would usually sleep three people, three cells now make up one room and they are huge! For those who want to dig a bit deeper into the prisons history there is one original cell which hasn’t been touched and is available to view plus the museum next door contains lots of info.

The cell rooms still have the original windows however there are plenty of added luxuries so that guests still get the full Malmaison experience. Our room had underfloor heating in the bathroom, roll top bath, enormous bed, a selection of magazines, tea and coffee making facilities (with some sweeeeeet as apple and blackberry biscuits) and a TV.

Whilst we were staying at the hotel we ate in the Bistro located in the bottom of the building (which also serves porridge for brekkie!). The Bistro has lots of exposed brick work and is very atmosphere – it feels a little like a dungeon. We started with the Moules followed by the Sea Bass washed down with a glass of organic wine. Both dishes went down a treat, we did want to try the cheese board which featured a long list of local cheeses but we didn’t have space. 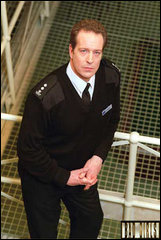 The next morning after dreams of Jim Fenner and Yvonne Atkins we headed out to explore the area and somehow managed to find ourselves in the Krispy Kreme store next door, not sure how that happened. Full of sugar we explored the old city of Oxford with its lovely buildings, coffee shops and bakeries. Even though it is just an hour away from London it feels like a million miles away – take Topshop for instance 11am and not one customer in sight! BONUS!

LondOntheInside would fully recommend a stay in the Malmaison Oxford especially if you’re looking for something a little more exciting than your usual four star hotels. It’s probably the nearest most people will get to spending a night in prison – been bad has never been so rewarding!