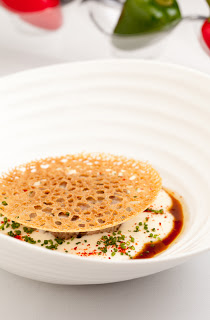 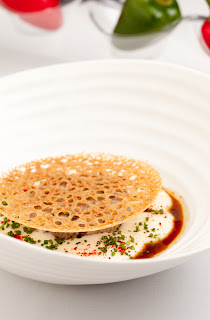 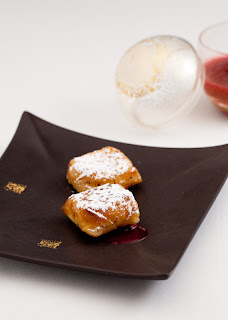 L’Atelier de Joël Robuchon is located next door to the Ivy, inside it’s dark and sexy with an open roof terrace on the top floor. We started with a Potato Martini Cocktail made with Chase Gin and served with a potato crisp and a bowl of handmade potato chips. This was followed a potato blini topped with caviar, smoked salmon and quail egg.

Then things really started to get impressive – a truffle marinated potato salad was followed by a creamy vichyssoise (potato and leek soup) with smoked haddock. What’s more Oliver hasn’t just used any old tatties, he has carefully selected each variety so that the texture and taste are perfectly matched to each dish.

The Gnocchi dish was anything but simple with a fricasse of mushrooms, fava beans and parsley emulsion. Then came our favourite dish of all, the flavoursome Iberico Pork served with a creamy potato mousseline amongst other things.

The meal ended with three desserts, the La Pomme Amande, bite size pastry parcels filled with a delicious potato, almond and vanilla cream served with red coulis – who would have thought sweet potato could taste so good! Another dessert of Piccolini which were potato churros, caramelised with grand marnier and brown sugar was followed by Potato Petit Fours.

The 8 course meal cost £152 with matching wines. For those who want to get the peeler out at home check out www.manyfacesofpotatoes.co.uk for recipes and tips on which tatties to use.