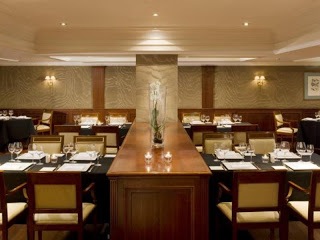 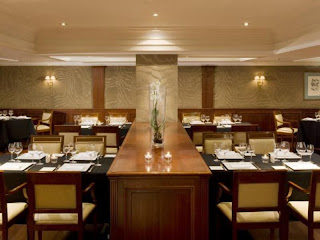 Hidden away inside the Meliã White House hotel near Regents Park, l’Albufera is a sophisticated, classy joint where every guest is treated like royalty. The level of service is second to none – the staff are friendly, attentive and knowledgeable, the atmosphere is subtly buzzing and the décor is understated and elegant.

Kicking off with warm, fresh bread and olives, the tapas starters were impressive in both their size and quality. Three dishes between two people may have been excessive – the portions are as large as main courses we’ve seen in some restaurants. The brown crab croquettes were crunchy on the outside and smooth on the inside, a strong but not overpoweringly fishy taste and the prawns sautéed in garlic, parsley and chilli had a delicate flavour.

The highlight of the starters though was the large board of Jabugo ham and tomato bread unlike any charcuterie we’ve had before. Smoky and meaty, it melted on the tongue deliciously. We were already feeling full when the main courses arrived. We sampled the veal fillet, served with peas and mushrooms with risotto and the paella L’Albufera with lobster squid and prawns. The veal was simplicity itself – tender and white and yielding to the knife. Much like the ham, it dissolved in the mouth and required virtually no chewing at all.

The creamy risotto had the kick of real Spanish sherry and came presented in an individual cheesy basket. The paella was the star of the show though, coming presented with a whole lobster! It is slightly daunting to have to use tools to attack your dinner, but eventually we worked out how to use the nutcracker to open the shell – Julia Roberts eat your heart out!

The dish is as much theatre as it is sustenance. Intrigue, entertainment and a damn tasty meal. When the food has been this good, it is only right to sample the desserts. The guanaja chocolate soufflé with saffron ice cream was fresh and prepared perfectly – the outside was firm but moist with a completely liquid chocolate centre. The cheeseboard was as huge as we’d come to expect with four variants of exclusively Spanish cheese. All washed down with a refreshing but slightly spiced chardonnay, this was without a doubt a faultless first class meal and a strong contender for our restaurant of the year.