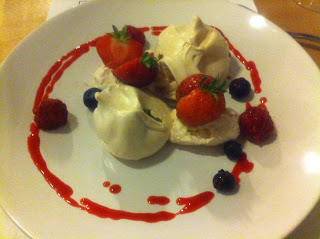 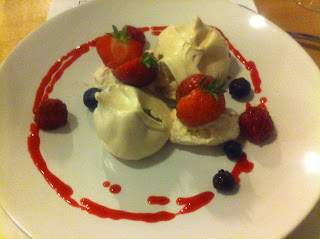 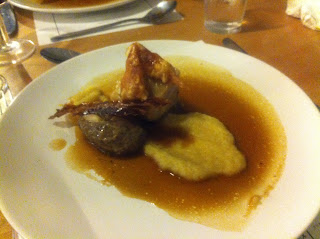 The night we visited was a five-course meal with live acoustic singers. The meal started with a Trio Of Canapes which included a monkfish tail wrapped in legume and a grape salad – fancy canapes alright! To drink we had the Agnes & Rene Mosse, Moussamousettes NV, a sparkling rose wine we have fallen in love with and now can’t find anywhere!

There were two starter options, the winner for us the Smoked Duck Breast with Cherries Three Ways – cherry compote, cherry coke reduction and savoury cherry with earl grey tea muffin. The dish was well thought out, the cherries held their own and complimented the smokey duck perfectly. The dish was served with a Riesling Reserve Andrew Scherer 2011 which was crisp and light.

For mains we opted for Trio of Pork – crispy pork belly, confit cheek, pancetta crisp – it would seem Jimmy likes doing threesomes! The Pork was full of flavour, each part had a very different texture and flavour. Served with spiced apple puree, calvados jus, roasties and vegetables. The wine with the main was probably our least favourite, Le Petit Fantet d’Hyppolyte 2011.

The meal ended with an Eton Mess which was as pretty as a picture, the homemade meringues with light and fluffy with a slight chewy texture. Matched with a Moscato d’Asti Lumine 2011 and followed by a rich square of homemade chocolate it was a story booking ending!

We can’t rave about this place enough, the food and wines were super, the service was great and the location is suitably different. What’s more the team are made up of men and men only, oh and they are all bloody good looking – definitely worth a trip, even just for a perv.