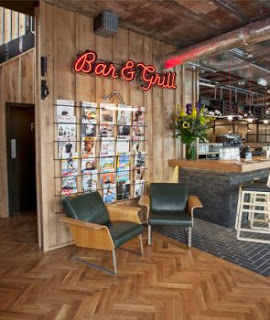 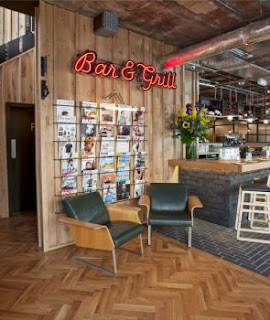 The cocktails come in at around £6 – the menu features old classics and a selection with a fun twist. We sampled the Pina Colada Deluxe which is a regular Pina Colada only with added banana and the Dark & Stormy which was a mixture of dark rum, lime and ginger ale.

To graze we ordered the Sonny Boy flatbread which resembled a pizza topped with chipotle shrimp, grilled pineapple, feta, roasted red pepper & chilli oil. Served fresh from the oven the dish is great to share with friends – a good start!

For mains we banged in two of the Giraffe Burgers which were decent burgers both in taste and size served with a smoky tomato relish that added a strong flavour to the bun – they certainly didn’t break any rules, but they didn’t make them either. Sweet potato fries got the thumbs up, although we really weren’t keen on the Poppy Seed,  Red Pepper and Celery slaw.

We ended with a couple of the dessert cocktails – the Espresso Martini which given its £5.50 price tag is quite the bargain and a Strawberry Cheesecake Daquiri. For cheap cocktails before payday in nice surrounds this place ain’t half bad, especially given its prime location.