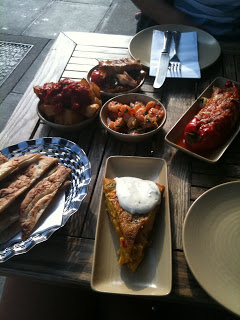 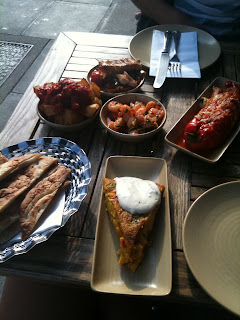 The tapas are cheap with dishes starting from £3.25 and going up to £5.95. We ate patatas bravas (because it really is rude to go for Spanish tapas and not order them), prawns in garlic oil, Spanish omelette with alioli, pepper stuffed with vegetables and mozzarella, chicken on bamboo sticks and bread.

The patata bravas were perfectly fried served with a kick ass chilli sauce whilst the chicken was so soft it fell off the stick. The prawns although a little on the small side were cooked in a garlic and chilli oil that doubled up as a great dip for the bread as did the garlic mayo. The only grumble we had was that the pepper filled with vegetables was slightly on the bland side as was the veg the chicken rested on.

One San Miguel and a glass of house wine brought the bill to just £27 which is pretty darn good value. The food was all fresh and homemade (thumbs up) and we would happily return. Like most of the restaurants in the area El Olivo doesn’t make the rules but it ain’t breaking them either. Try it you just might like it!