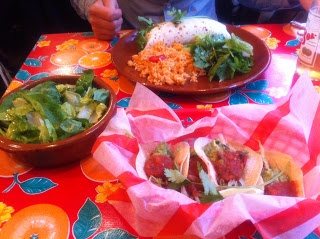 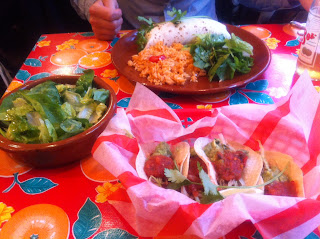 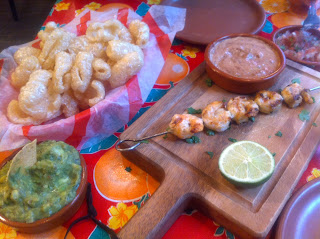 There’s no denying it this laid back joint is uber cool, decked out in all things Mexican; skulls, flowers, hot sauce bottles, colourful artwork and table tops. Shoving ourselves in a seat by the window we watched the restaurant fill up until there wasn’t an empty seat in the house. The menu is easily laid out with ‘explanations’ on the reverse for those not too familiar with the Mexican way of dining. A tough choice tonight we thought, tough because there was so much we wanted.

It was a brave decision opting for Grilled Tiger Prawns, Chicharrones (Mexican pork scratchings), Padron Peppers, Guacamole and Salsa. The prawns disappeared in minutes and the accompanying Chipotole dip kicked ass, the Guacamole was thick, chunky and nicely spiced and the fresh salsa had a lovely tangy taste. The only thing we weren’t sure of were the Chicharrones, a bit too much like pork scratchings (we know it said on the menu), we’d suggest you order the Tortilla Chips instead.

We followed with a Pork Carnitas Burrito, packed to the brim with juicy pork and served with a generous portion of soft Mexican rice and salad included in the price – bargain. The Pork Tacos we’re three small parcels, small in size but big in flavour they were filled with the same tender meat. Apart from our boob on the ordering we had no grumbles on the food however things really stepped up a notch downstairs…

Pink Chihuahua is a members only basement bar however if you are eating then you can get a pass down there. The barman Dick Bradsell is a legend, he invented Russian Spring Punch and Espresso Martini and he still works behind the bar so it’s well worth a visit. We tried the Rum Punch which was made with a 60% proof rum – laughing juice – and a Tommy’s Margarita with a nice citrus tang.

With decent grub, super cocktails and quirky decor you could easily whittle away your pay packet here and we’ll definitely be giving it a go. Perfect for dates, with a group or to impress a client (they even do a takeaway menu available from noon to 11pm ideal for working lunches or office celebrations) – just remember though that Rum is 60%, we wouldn’t want any embarrassing incidents would we?