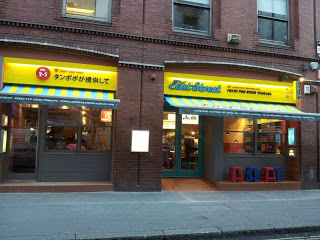 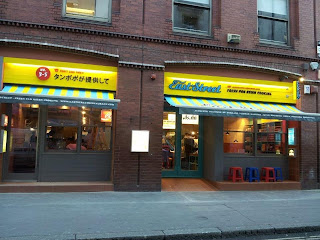 The relaxed and informal setting makes the place feel welcoming – the service is great too even on the opening night. To start we shared a BBQ platter of Sesame Prawn skewers, Bulgogi, Satay and Yakitoria served on a slab of slate. Highlights were the chicken satay with a chunky homemade peanut sauce and the Sesame Prawn skewers, we’d recommend going for an extra portion per person if you are greedy hungry.

For mains one of us headed to Japan for Chicken Katsu Curry whilst the other delved into Thailand with a Pad Thai and Som Tam (Papaya salad). The Katsu curry was a generous portion of breadcrumbed chicken served with curry sauce, sticky rice and a large side salad.

The Pad Thai was made with flat noodles rather than rice noodles and we have to say we prefer the later. However it was still a fairly decent Pad Thai with a good portion of prawns and egg in the mixture.  The Papaya Salad was more of an English salad with chunky strips of Papaya and large slices of tomato. It also lacked the chilli kick of more authentic Som Tam’s and the fish sauce was noticeably absent from the dressing.

Don’t get us wrong it wasn’t a bad meal – the food is fresh and tasty but the dishes we sampled seemed more like Westernised versions of their Eastern counterparts. Drinks wise the menu is quirky with Asian beers, wine and three cocktails (including the popular farang drink Sangsom & Coke), oh and the chocolate ice-cream is the snizzle.