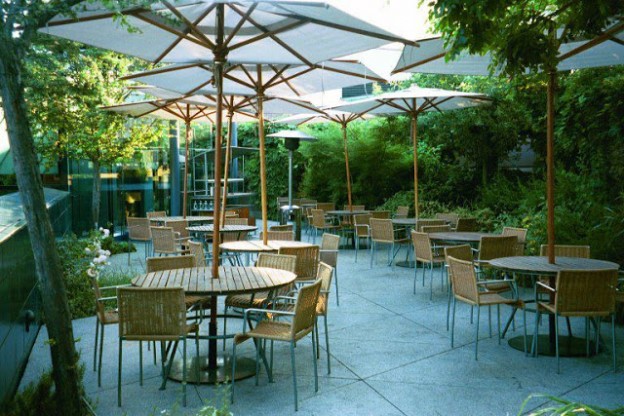 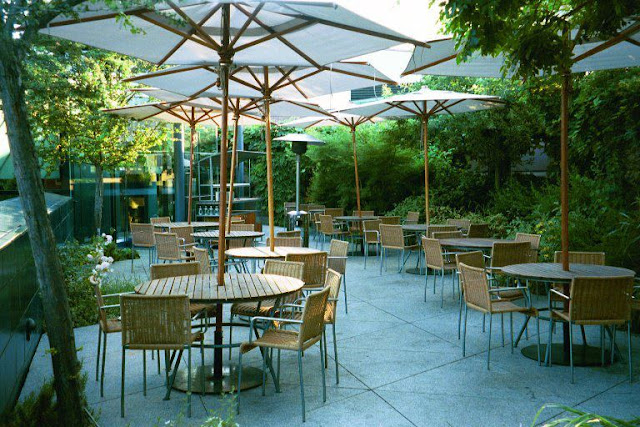 After a bit of a hunt we finally found the lift tucked away between a busy office building and GAP – not the most glamorous of entrances but good if you need to pick-up a new T-shirt on the way out. We were however pleasantly surprised as we stepped out onto the outdoor terrace and gardens to find a mini oasis which felt a million miles away from the hustle and bustle below.

We choose to eat from the set menu which is great value at £30 for three courses, especially given the crisp white table cloths, a trillion glasses and shiny cutlery. Whilst we waited we took advantage of the complimentary basket of warm bread rolls a selection of white, seeded and wholemeal.

To start we had the goats cheese and vegetable terrine which is dusted with pistachio crumbs to add a subtle crunch and served on salad with a maple and rosemary dressing. The huge portion of rich goats cheese could have done with a little more salad but we won’t complain! We also tried the snails which came in a portion of six, and whilst only one of us delved in, that half thought they were worth coming back for.

For mains we had the Sea Bass with fennel, courgette, tomato and saffron casserole. The casserole worked brilliantly at giving the what could have been a standard piece of sea bass a real kick – full of flavour with a real depth to the taste. Chicken Supreme with sauteed wild mushrooms and artichoke was another succesful dish and there were no complaints all round.

Dessert was Lemon Tarte or tarte au citron as they say in Paris, served alongside a berry compote, the tarte was zesty and smooth. We’d say avoid the cheese board and stick to the desserts, they faired better and you didn’t have to pay the £4 supplement which came with the cheese.

The restaurant has a huge wine list, as you would expect. Luckily we were with some what of a wine connoisseur who was also paying the bill and picked a good selection for us to try – a great location for a boozey business lunch or early dinner whilst the sun is still shining!