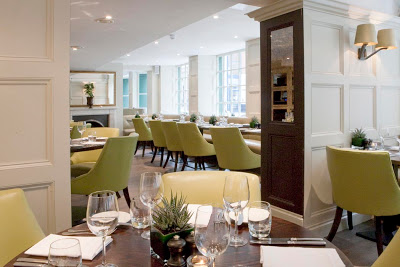 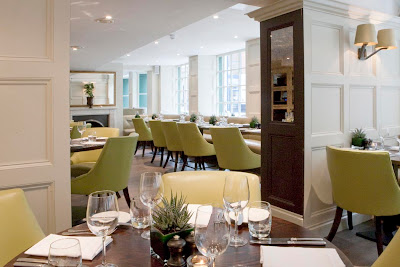 Located in between Barbican and Moorgate we were surprised to see, that even on a Saturday night there were only two free tables in the house. Seated at our table by the uber efficient hostess, a slab of fresh white bread arrived accompanied by two pea pods and two radishes.
We’d heard great things about the Scallops so had already decided to order them before we arrived, only there were no Scallops left…Obviously a testament to how popular they are but we were gutted all the same. However the special starter of warmed beetroot, smoked eel, black pudding and potatoes soon took our mind off it. The dish served on a wooden slab contained without doubt the best black pudding we’ve ever eaten, combined with the eel and beetroot this dish more than deserved it’s place on the Specials Menu. 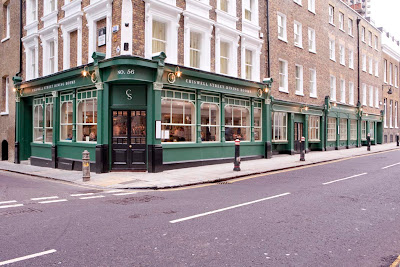 Another starter of Berkswell Cheese and wild leek tart served fresh from the oven was gooey and rich, a little too rich as a starter for our own tastes, but our mistake in choosing it. Mains of Roast rump of West Devon lamb, lemon courgettes, potato gratin, rosemary jus and Grilled whole Cornish lemon sole, dill butter, tenderstem broccoli sealed the deal. The juicy, tender lamb sat well with the potato gratin which had been cooked in meat juices whilst the flaky fish coated in dill butter was so soft it melted in our mouths.

We were too full for desserts but managed to squeeze in a small chocolate ice-cream – if we went again we’d force down a knickerbocker glory. We drank the house red wine especially for the ETM venues which is soft and fruity.

We really couldn’t fault the meal, except the missing Scallops however we’ll be back for to try them soon. A step up from your usual pub grub so don’t go expecting gastro prices! A great place for a intimate celebration or meal with the ‘rents.