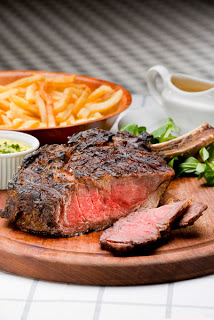 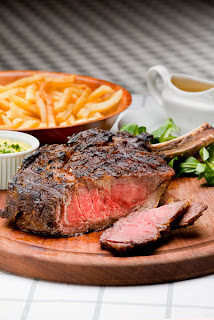 And so we arrived at Chez Gerard Charlotte Street after spending a whole day salivating and dreaming of sirloins and t-bones only to find the restaurant full of panicking firemen trying to deal with a gas leak. A sense of panic set in we realised the restaurant wouldn’t be grilling any meat for us but Chez Gerard came to our aid and transferred our reservation to the Covent Garden branch – smiles all round!

Once seated and suitably calmed, we ordered our meal. The staff were friendly, approachable and welcomed questions about the menu. The treats on offer covered all bases of French cuisine, plenty of sea food including salmon, red snapper and sea bass, roast chicken, lamb and a whole assortment of salads, but guess we what we ordered…….

The steaks are what Chez Gerard is celebrated for – from smaller cuts perfect for lunch, to marbled T-Bone, succulent fillet, rump and sirloin. We opted for the 8oz sirloin, a king amongst steaks. Without a grain of fat on it, the tender meat fell apart with barely a touch of the knife. Served alongside perfectly crispy French fries and with petit pois and mini onions the portion size was just right for a hungry carnivore.

Man cannot live on steak alone though, so we also sampled the salmon. A large portion with very subtle flavours, served on new potatoes with veg of the day and hollandaise sauce. The wine list is good too; the Cabernet Sauvignon is full bodied and rich whilst the Sauvignon Blanc is refreshing and fruity.

Chez Gerard is a delight with great service and good food but do keep your eye on the bill – it can creep up quietly and sting you if you’re not careful.

As the French would say bon appétit!