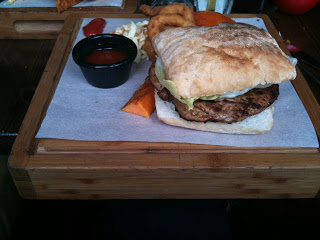 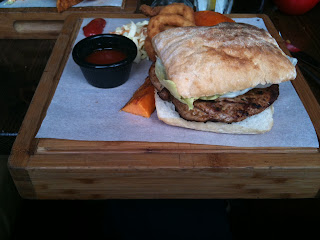 We also dived into jerk chicken burgers served on ciabattas with onions rings, sweet potato wedges and homemade coleslaw. The dish is served on a wooden slab and we struggled to finish it after the shakes.

The chicken breast was well seasoned and juicy and the sweet potato wedges were a great alternative to french fries. Thumbs up! The only grumble we had was the onion rings were of the frozen variety and not homemade (sad face).

If you’re in the area check it out – AM or PM. This month also sees the launch of the Carnivore Club Menu with a different meat on offer every Tuesday kicking off today with kangaroo burgers followed by crocodile steaks, zebra fillet and other foreign delicacies. We’ll pass on those…..