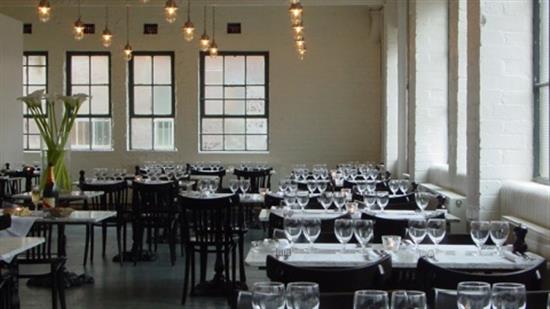 We have been meaning to try Bistrotheque for ages, but perhaps due to its location we never got round to it. Despite rumours we do not hang around on dark industrial estates….That said on Sunday we did and we made the effort to check in on the three course set lunch menu.

We started with a jug of Apple and Almond Bellini which wasn’t bad for £27.50 as we got about two glasses each (there were 5 of us). For starter we opted for the mixed beet salad with stilton and walnuts. The flavours and textures worked well together and left us wanting more, the perfect size for a starter.

For main we went for the roast beef cooked rare, served with roast potatoes, Yorkshire pudding, roast parsnips and brussel sprouts with chestnut and bacon. The beef was a great piece of meat, cooked as requested and served in a huge portion. The Yorkshire was homemade – hooray! And the brussel sprouts were a welcome addition. The only grumbles we had were that the potatoes were dried out, so much so we couldn’t eat them and the gravy could have done with being a little thicker and tastier.

For dessert we had the lemon trifle with granita, a lighter option which had a good mix of sweet and sour flavours. We weren’t blown away by Bistrotheque although the general consensus of our table, all of whom had visited before was that the food wasn’t as good as it usually is. Would we go back? We’d probably be willing to give it another shot but perhaps try the brunch menu, it looked rather nice.