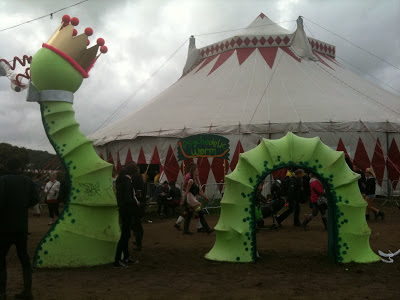 Safely camped in the ‘blue’ section we headed straight out of catch a set from Mazes at the Sailor Jerry’s tent. Mazes are a band who’s DIY pop rock sound has seen them support LondOnTheInside favourites Crocodiles and Dum Dum Girls. Their pop vocal hooks over distorted guitar makes their music amazingly catchy and accessible. Mazes were playing twice at this year’s Bestival due to last year’s cancellation, when they arrived too late; but they certainly made up for it this time around. 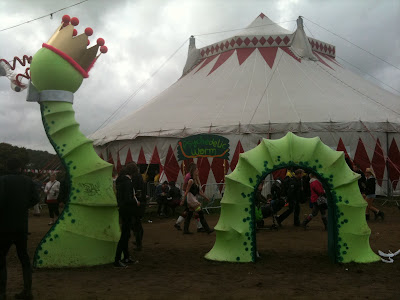 Being at a festival it’s always wise to get your bearings so we took a look around, drinks prices were pretty normal and the choice of food was decent although far too many people were eating Pizza Express pizzas. Tut Tut! We wondered around the Swamp Shack, walked past the tree house – which is also a club, peeked in the inflatable chapel and reception where some folk were getting down and dirty to 80’s tunes. Speaking of dirty, we also spotted a crowd gathered at a shed labelled ‘XXX’ and let’s just say two people may regret what the gathering saw them getting up to – we’re not sure if this was ‘part of the festival’ or not but we left with mouths open….we’ll say no more!

Day 2 saw us up early and grabbing a breakfast smoothie before heading back over to the Sailor Jerry’s tent to catch an early set from YUCK. Their self titled debut was released earlier this year and it is brilliant. Their wall of sound is likened to Sonic Youth, they are loud with feedback a plenty. A big ‘YES YES YES’ from us. With Sailor Jerry tattoos donned upon our bodies we replenished drinks from the cocktail bar and sat on the grass in the afternoon sun. It’s times like these when festivals are at their best and the atmosphere in Bestival is spot on. People are there to have a good time (as we’d witnessed the night before).

A buggy took us behind the scenes and up to where the Off Guard Gigs were being filmed. We were there to catch Frankie and the Heartstrings sitting in the Right Guard van to play an acoustic session. The artists have it so much better don’t they, there was no queue at the bar, they had porta-cabins to nip into and anything they needed upon request.

The Cure were one of the highlights of the festival. Stood right at the front in the press section against the barrier we saw Robert Smith perform some of the greatest songs we’ve been singing and dancing to all our lives. The show was incredible with just four guys making music that has inspired generation after generation, we don’t need to tell you how good it was.

The next morning we were feeling pretty pleased that our little tent had survived the storm even if we were slightly wet inside. Beer in hand we headed straight to the Psychedelic Worm to watch ‘Two Wounded Birds’ who have replaced their guitarist since seeing them a mere week ago. Two Wounded Birds have pretty much been our band of the summer and they carried the same passion and delivery with the new member as they have always done. Johnny notable played more guitar this time around giving a much more fuller and dark sound, keep it up.

Over to the main stage we were at the front again for the Drums who please the crowd with their east coast indie pop. The new track from second album ‘Portamento’ slotted into their set list brilliantly well and the crowd’s reaction said it all. Current single ‘Money’ saw the crowd erupt into a frenzy. The Drums seem to be following the ethos of ‘if it ain’t broke, don’t fix it’ and they have their image and sound down to a T.

Kelis was next up, who dominated the main stage practically on her own whilst wearing a top hat, basque and hot pants. Her set seemed to be more ‘dancey’ than R&B and a medley of samples and covers popped up throughout. The crowd loved her and she admitted she wasn’t there for their benefit, but to pleasure herself, although she invited everyone to participate.

With high winds practically lifting people of the floor and a storm warning we had the chance to get a lift back to London and took it. We’d had a blast. Bestival is big enough to explore without getting bored and the line up is extremely eclectic. If the line up suited us we’d be back again for sure.