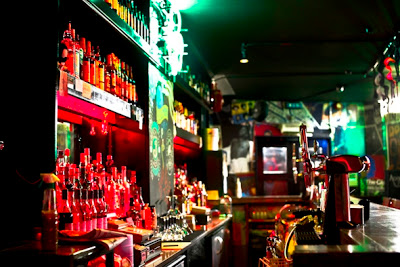 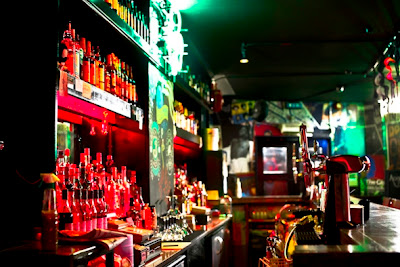 For those familiar with its sister venue, ‘Slim Jim’s Liquor Store’ on Upper Street, Angel, The Decor of Aces & Eights will come as no surprise, very low lighting (individual candles preferred on every table instead of overpowering ceiling lights), large booths, big enough to fit you and all your mates in and vintage gig posters covering the walls!

Aces does exactly what it says on the tin: Rock – A jukebox jam packed with your favourite records, from The Doors through to Death From Above 1979 and everything in-between. Liquor – A wide range of draught beers, wines and spirits specialising in whisky, (see their whisky menu for a range or rare bourbon, malts and scotch) as well as a more than impressive cocktail range (we recommend their take on the ‘Old Fashioned’ – the best we’ve found across London). And Finally Pizza – My oh my the pizza! Serving about 15 different pizzas, handmade fresh to order, in a range of sizes that are ideal to share, the pizzas are yet another reason to visit. And, at only £7-£8 for a 12” they’re great value.