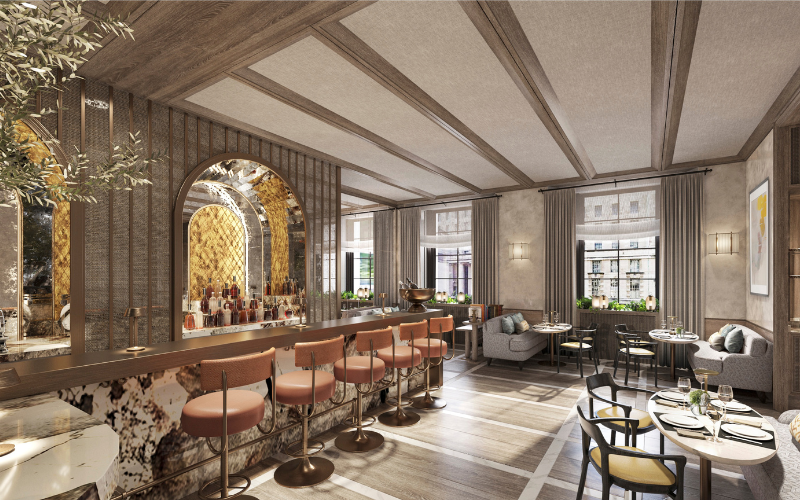 The OWO (Old War Office) in Whitehall has announced the first restaurant that’ll be taking up residency in the redevelopment of the major heritage site. Last year it was revealed that luxury hotel group Raffles had taken ownership of the property, which was to undergo a monumental renovation before being opened to the public for the first time in over a century. The new hotel is set to have a total of nine restaurants (including three from Mauro Colagreco of Mirazur) and three bars in residence, with Milanese restaurant Paper Moon being the first independent restaurant on that list.

Founded in 1977, Paper Moon started off as a family-run restaurant in the heart of Milan’s fashion district and has since grown into a major group with several international branches. The London outpost will take over one of the grand heritage spaces inside The OWO, overlooking Horse Guards Avenue, and redesign it with elements that nod to the warmth of an Italian house. Olive trees and other greenery will feature throughout, while terracotta colours, Travertine marble and brass will shape the interiors of the main and private dining rooms and bar.

The menu will remain true to its founding concept, with plenty of familiar Italian favourites that will change seasonally. We don’t have any specifics on food as of yet, but if the menu at the OG is anything to go by, we can expect a range of classic antipasti, primi piatti and secondi piatti, including fritto misto, spaghetti alle vongole, and homemade spaghettone with artichoke carbonara. At the bar, there’ll be plenty of traditional Italian cocktails with a modern twist to be enjoyed at aperitivo hour as well as a list of over 100 fine wines from various regions across Europe. Cin cin!