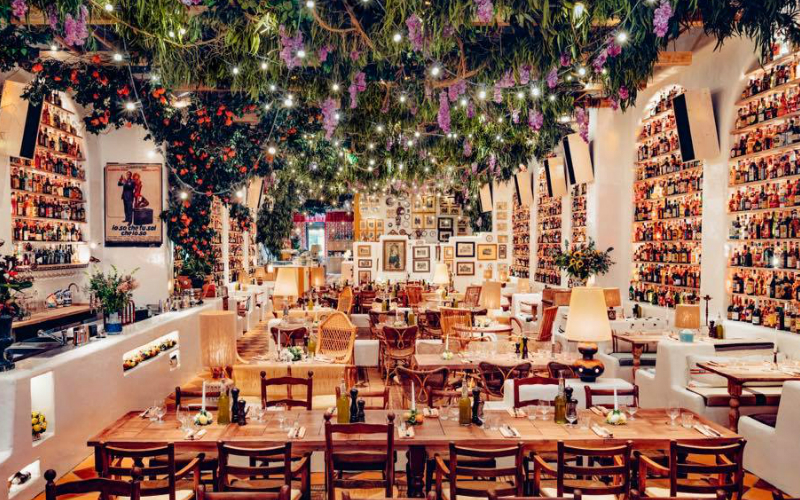 Between Brexit, climate change, and an ever-expanding list of lurgies, we need to find fun wherever and whenever we can get it, and that includes dinner time. There’s nothing wrong with serious food cooked by serious chefs, lengthy menus of challenging dishes, and proper plates and glasses, but sometimes you need a meal that’s so ridiculous in a restaurant that’s so over the top you don’t really know where to look. So if you’re after more fun dining than fine dining, then read on for our favourite OTT restaurants in London…

With a name like Bacchanalia and a man like Richard Caring in charge, it’s no surprise that this restaurant is far from a minimalist, understated affair. It launched with an outré party, headlined by Florence and the Machine (Cher wasn’t available), which set the tone for how it intended to go on. With hand-painted ceiling murals, a floor-to-ceiling interpretation of ‘Romans In Their Decadence’ by Gary Myatt, four huge Damien Hirst statues, and an array of 2000-year-old Greek and Roman artworks, Bacchanalia’s design is certainly among the most extravagant and ambitious in the city. The food may be *slightly* beside the point here, but expect OTT prices in keeping with the general theme – we’re talking upwards of £70 for seabass.

Throw caution to the wind and ignore your bank balance (at least for one night) by making use of those ‘Press For Champagne’ buttons at Bob Bob Ricard and Bob Bob Cite. Whether you prefer the decadence of the Soho restaurant or the futuristic feel of the City site, having fizz on demand never gets old.

There’s OTT and then there’s Big Mamma OTT. First we had Gloria, covered in plants on the outside and decked out like 1970s Capri on the inside, and then we got Circolo Popolare, with its wall-to-wall bottles and foliage-filled ceilings. It’s Disneyland for Italian dining. The food is just as maximalist; carbonara served out of wheels of cheese, ten-level lasagnas and lemon meringue pies the size of your head. While the food might be a bit forgettable, a night here is anything but.

From the jungle-inspired interiors (lots of plants, lots of gold, lots of butterflies and peacocks) to the huge open kitchen stocked with great cuts of meat and pineapples dripping with caramel, Amazonico is the South American equivalent of stepping through the wardrobe into Narnia. It’s a lot of fun and, despite the bank balance breaking prices, there’s a lot to take your mind off real life here.

There aren’t many places that could draw people on the basis of their loos, but nowhere else has the Insta-famous egg pods that Sketch does. Aside from snapping toilet selfies, there’s the forest-themed Glade room, complete with a fluffy carpet; the lavish Parlour; the very fancy three Michelin-starred Lecture Room & Library; and the new gold Gallery, decorated with Yinka Shonibare artwork.

Don’t go to Bunga Bunga if you just want a quiet dinner and a glass of wine. Do go if you want metre-long pizzas, karaoke, cocktails in the mugs shaped the heads of Berlusconi and Don Corleone, sharing bevs served in gondolas, and statues of David, and immersive dining experiences. It’s A LOT.

You really can’t go wrong with a good rooftop restaurant and Seabird, on the 14th floor of The Hoxton, Southwark, has a corker of a terrace. Not only do you get epic views over London, there’s a lot to look at inside the restaurant too – with a marble raw bar, rattan furniture and palm trees it’s pure summer vibes in there, and that’s before you get onto the towering shellfish platters, toucan cocktails and THAT Manchego cheesecake.