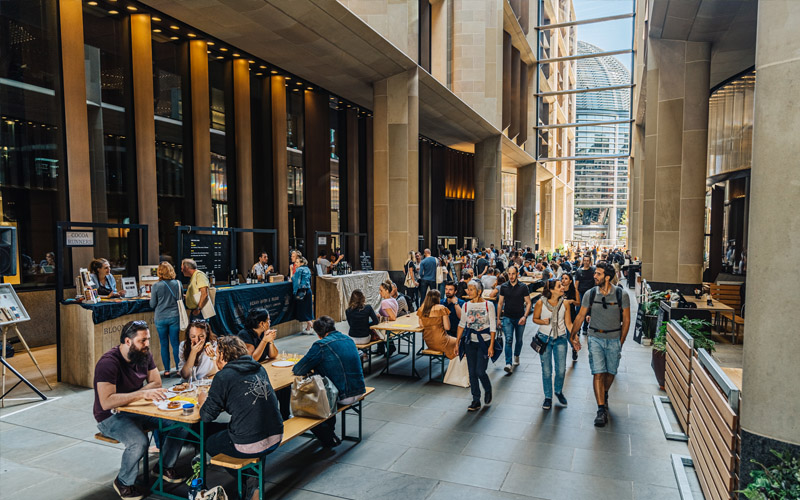 The City of London has changed a lot over the years. Once the site of an ancient river, a Roman road and the Temple of Mithras, the triangular patch of land between Bank, Mansion House and Cannon Street stations is now home to the European HQ of Bloomberg. As well as the impressive office building and the London Mithraeum Bloomberg SPACE (where you can check out the ruins of that temple), the area also features Bloomberg Arcade.

The pedestrianised boulevard hosts cultural experiences like music concerts and public art installations – the likes of Olafur Eliasson and Ackroyd & Harvey have exhibited here – and it boasts a collection of independent restaurants curated by Bloomberg’s Chief Food Critic Richard Vines. From the best udon in the city to whopping 20″ pizzas to wine from around the world, this slice of the Square Mile has you covered from morning to night.

House-roasted coffee, bangin’ brunches, globally-inspired small plates…the Caravan team knows what it’s doing when it comes to all-day dining, as proven by sites in Exmouth Market, King’s Cross, Bankside and Fitzrovia. The three-level Caravan city packs a lot in. There’s a split-level dining room where you can tuck into everything from stilton & peanut wontons to broken lamb meatballs to sourdough pizzas; an al fresco terrace, a coffee and cocktail bar; and a flexible working and events space. Basically you’d need never leave.

From starting as a food truck in 2012, New Yorker Zan Kaufman has now grown Bleecker to four locations including this 30-seat joint in the Arcade. Bleecker has gone from strength to strength since it started mainly because its flipping some of the best burgers in all of London. The key is simplicity. The NYC-inspired burgers are made from rare-breed, grass-fed, dry-aged beef, house made burger sauce and sesame seed buns, with minimal toppings so as to not distract from that beef. Hand-cut fries, craft beers and shakes made with their own soft serve complete the menu – you’ll find no mad specials here. Order a double cheeseburger, fries and a Black & White shake and prepare to enter burger heaven.

Run by Danish restaurateur Soren Jessen, Ekte is a slice of Scandinavia in the Square Mile. You can get coffee, pastries and smorrebrods (open sandwiches) in the cafe and deli, whereas the main restaurant has you covered all day long with Swedish potato pancakes with bacon and lingonberries, Danish meatballs with mash and gravy, and the chef’s selection of herring. Ekte pours wines and cocktails but if you’re on the wagon, you shouldn’t miss the chance to sample a tipple or two from the dedicated aquavit menu.

The JKS Restaurants group – the team behind Trishna, Hoppers, Gymkhana and more – know a thing or two about creating a buzzy restaurant and Brigadiers is no exception. The focus is Indian BBQ but in reality Brigadiers offers so much more than that. Yes you can come in and feast on dishes like BBQ butter chicken wings, kid goat shoulder with lacha paratha, lobster & shrimp kati rolls, and dum beef shin & bone marrow biryani. But you can also catch a match being screened in the sports bar, grab a drink in the tap room or play a round of pool whilst making use of the whisky vending machine. Oh and they also do a Monday night curry club, a bottomless brunch and a weekend sports menu. You’ll need repeat visits to get through it all – and that’s no bad thing.

Even in the brightest sunshine, nobody could confuse the City of London with California, except maybe if they were inside Ahi Poke tucking into an Oahu bowl. It’s west coast vibes all the way thanks to those fresh poke bowls. Classic combos like rice, ahi tuna and radish or salmon, quinoa and yuzu avocado are all there but you can go wild with the BYOB option, adding non-traditional items like udon noodles, gochujang mushrooms, seaweed cashews, kimchi cucumber and Korean BBQ sauce to your bowls.

Homeslice serve up some of the biggest pizzas in town – we’re talking 20-inch beasts – but it’s not all about size as there are some seriously interesting toppings to get stuck into. Seasonal combos include chorizo, corn & coriander and spiced lamb, savoy cabbage & sumac yoghurt, and luckily you can split the pizzas 50/50. If you don’t have a mammoth appetite (or someone to share with), Homeslice also serves single slices of classic margs, mushroom, pumpkin seed & chilli or salami & rocket. With frizzante on tap, craft beers on rotation and house wine on offer for £4.50 a glass you’ll want to get a slice’a that action.

Best noodles in London? Koya is up there. Ever since the original opened in Soho back in 2010 with its short menu focused on udon noodles, it’s not really been emulated since. The City branch is still all about the udon, with various topping options across hot noodles in hot broth; cold noodles in hot broth: cold noodles with cold sauce to dip or to pour. Koya’s menu of small plates is no after thought either. The crispy prawn heads (a regular special from Soho) has found a permanent home here and the tonkatsu is exceptional, rivalling many found in Japan.

Vinoteca has branches in King Cross’s, Farringdon, Marylebone and Chiswick but the one in the Arcade is the biggest of the bunch. There’s a bar, a restaurant, a private dining area, a patio and a dedicated wine shop stocking over 200 bottles, all broken down by style and region. The restaurant offers a daily changing British-European menu if you want something more substantial (or on top of) cheeses and cured meats, and because this place is all about the wine, each dish comes with a suggested pairing. With 25 available by the glass, that’s a lot of vino to sample.