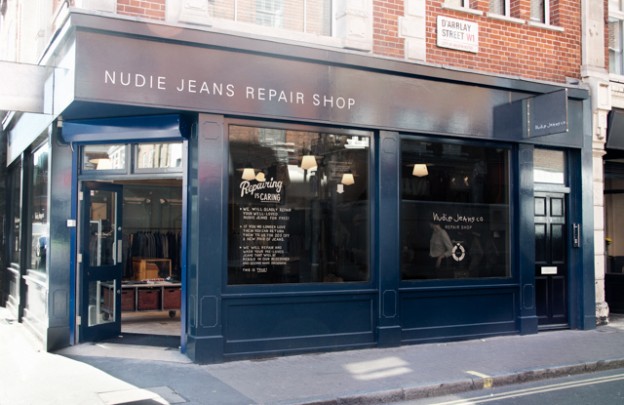 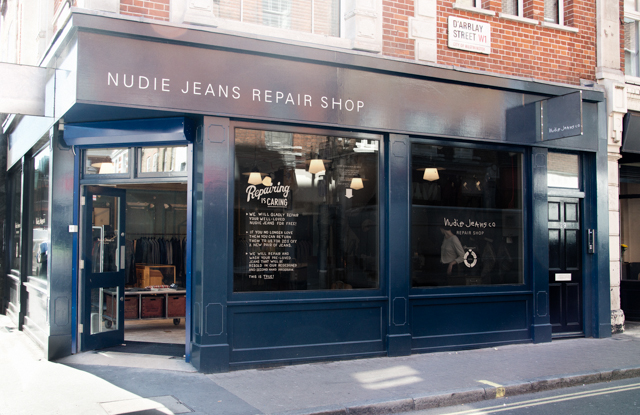 Plonked on the corner of D’Arblay Street and the uber cool Berwick Street, possible the best destination for men’s fashion in London. Nudie’s neighbours are Oliver Spencer, Percival, the tailor Chris Kerr, and vintage sellers Bang Bang to name a few. You won’t find these stores anywhere else. It’s a serious hub of top notch menswear without being Mayfair flashy.

It’s easy to spot the new store, with its big smoked out windows and deep blue exterior. What you will also notice is the line of sewing machines. This Nudie store is one of a kind, a world first. Not only can you find the full men’s collection, but also Nudies first ever Global Repair Station. Here your love worn Nudies, battered, bruised and shredded can be restored by one of the in-house experts. You can also have your new Nudies made to look like your old ones. This idea fits seamlessly with Nudies sustainability values – they even sell rugs made from recycled and scrap denim.

100% organic cotton and a smashing starting price of £90, Nudie is possible our favourite men’s brand. We are wearing High Kais right now, and look forward to the day we need them repaired!