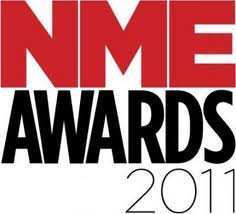 Kicking off the evening were The Vaccines and if you’ve not heard of them yet, you must have been living under a particularly secluded soundproof rock on the moon because these boys seem to be everyone’s tip for 2011 and they didn’t disappoint. Their debut album is due to be released soon and they used this stage to prove that they have the substance to match the hype. Pick of the bunch was ‘Wreckin’ Bar’, their Ramones-influenced single that first brought them to the attention of many, and easily the best 120-second song this reviewer has ever heard. Other favourites included ‘Post Break Up Sex’ and ‘If You Wanna’, but any of their tracks tonight could very easily be released as a single.

Everything Everything followed, putting on a show of playfulness and whimsy. Lead singer Jonathan Higgs turns lyrical somersaults trying to cram in more words into his lines than is probably recommended and his voice is certainly unique, although it may not be to everyone’s taste. ‘MY KZ YR BF’ went down like a storm on the dance floor, skinny indie limbs throwing dangerously arrhythmic shapes, and the set was finished on the crescendo of ‘Photoshop Handsome’.

Dubstep may have seemed a strange choice to follow to indie guitar bands, but the decision to have Magnetic Man on the bill was certainly a success based on the reception of the crowd. The three members that make up Magnetic Man – Skream, Artwork and Benga – are not exactly charismatic crowd-pleasing types, the whole gig was spent backlit behind their respective laptops, but with a live MC the atmosphere moved up a gear as the crowd focussed less on the stage and more on dancing and having fun. Highlights were Perfect Stranger (a collaboration with Katy B), I Need Air, and especially Getting Nowhere with Jonathan from Everything Everything stepping in to replace John Legend who features on the original version. 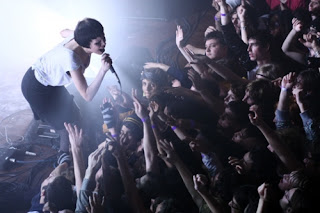 Finally, Crystal Castles emerged to a rapturous reception, Alice Glass working through the pain of a broken ankle and Ethan Kath almost obscured behind a huge bank of keyboards, synths and samplers. Alice’s movement was understandably limited, but it didn’t stop her stomping around the stage, climbing on monitors and even diving into the crowd, one lucky punter coming away with the ultimate souvenir of her crutches. This gig was only a few days before the awards ceremony where they were given the John Peel Award for Innovation and it’s not difficult to see why – Crystal Castles could easily have been dismissed as a hipster joke, but instead they have blazed a trail for other noise-pop bands such as Sleigh Bells and were absolutely worshipped by the crowd at this show.