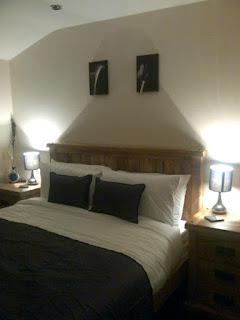 The hotel has only six rooms and feels more like a guest house than a hotel. Each room is almost identical to the next except for the top suite which has another side room with sofa. Decked out in purples and blacks the rooms actually look like someone’s bedroom rather than a hotel room, although we quite like this – sleeper over anyone?

And one thing we did notice was the lack of noise in the rooms, special care has been taken to ensure the building is completely sound proofed.

Whilst the hotel may not attract many overseas visitors (except for during the Olympics, as it’s only 3 stops from Stratford) it is the ideal location for the parents of Dalstonites who may want to stay close to their children when they visit without enduring the “shared house” couch.