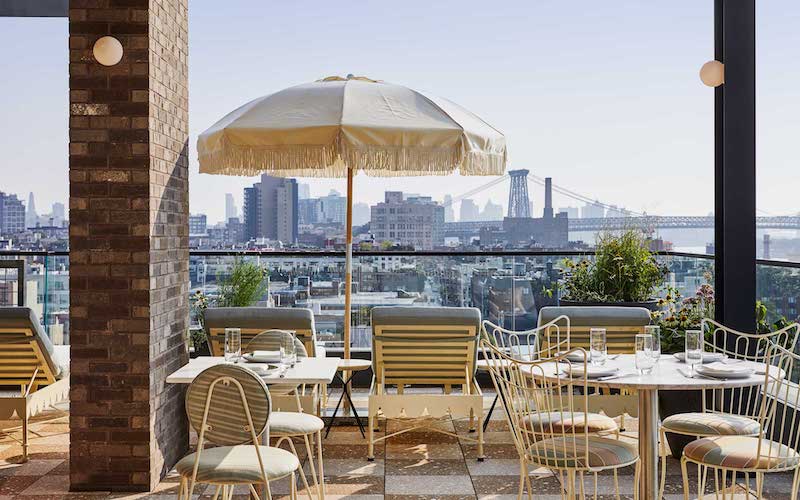 The New York hotel scene is constantly evolving, with several major openings every year. With increasing competition for guests, New York hotels are pulling out all the stops with bold design, cool events, fitness programmes, and excellent food and beverage offerings. Here we round up the latest and upcoming hot openings so you can be sure you’re checking in to one of the best new hotels on your next New York trip. And more for NYC tips, check out New York on the Inside.

It’s not often that an airport hotel offers too much to get excited about, but the new TWA Hotel at JFK is setting a whole new level. Located in the old TWA terminal building, which was designed by Eero Saarinen and opened in 1962, the architecture is classic 60s retro and was used as a location for Catch Me If You Can. Set to open as 512 room hotel in May, the design will play up to its 60s heritage with retro furniture, vintage TWA posters and old rotary phones. There’s going to be six restaurants, shops, bars, and even a rooftop pool so it really is redefining what an airport hotel can be. Best of all though is a cocktail lounge in an old 1958 jet that was commissioned by TWA owner Howard Hughes, which will be set just outside the hotel. Looks like a layover at the airport could become a pleasure rather than a chore.

Moxy’s third New York hotel is in Chelsea and it’s quite a beast with 349 rooms spread over 35 stories. True to Moxy’s brand values the design is bold, with plenty of carefully created Insta-moments including a three story living wall on the exterior and a rooftop lounge with retractable glass wall that encloses it in winter and makes it al fresco in summer, all at the touch of a button. Needless to say, neon, LED screens and modern artworks are used liberally throughout the interiors. In terms of facilities, pretty much every box has been ticked too, with a cafe, Italian restaurant, co-working lounge, fitness class, DJs, meditation, and flower workshops to name a few.

Ace’s latest creation, which opens in NYC on the Lower East Side in spring, promises to be a ‘hotel distilled to its most beautiful parts’. There’s 200 ‘intimate’ (read: tiny) rooms with a minimalist aesthetic of plain wood, a white bed, bathroom, bluetooth speaker and not much else. In short, if you need a room for the night and aren’t bothered about any of the extras then this gives it to you in a small but stylish package. This being New York there’s plenty to keep you entertained in the city, and this being the Ace family there’s plenty going on elsewhere in the hotel including a new restaurant, Floret, that will blend Mediterranean and North African flavours.

Just as Londoners do anything to avoid Leicester Square, New Yorkers avoid Times Square like the plague. This could be set to change with the launch of Marriott’s high end EDITION brand in March, bringing a bit of sophisticated cool to an area known for bright lights and tourists. Adding to the Clocktower Edition in Flatiron, which features a restaurant from London’s own Jason Atherton, the new opening will have 452 rooms, a cabaret theatre, and a restaurant from Michelin-starred chef John Fraser, as well as an outdoor terrace restaurant. The modern design will be a world away from Times Square with rich woods, lush velvets, waxed leathers, polished marbles and artworks from Anish Kapoor.

The Hoxton’s first property in the States is now open in Williamsburg and it’s a stunner. Located on Whythe Avenue, a couple of blocks back from the East River, the front facing rooms have epic views of the Manhattan skyline which can also be taken in from the hotel’s rooftop bar and restaurant, Summerly. Inside there’s another restaurant and bar from the owners of Brooklyn’s Five Leaves and Hotel Delmano, as well as a coffee bar and beautiful lobby space designed by Ennismore’s Deisgn Studio. The rooms have the usual Hoxton-cool design and perks with free water, wifi, and a collection of books in each room chosen by a local Hox Friend. The Hoxton has quickly become one of Brooklyn’s hotest hangouts as well as its best hotel.