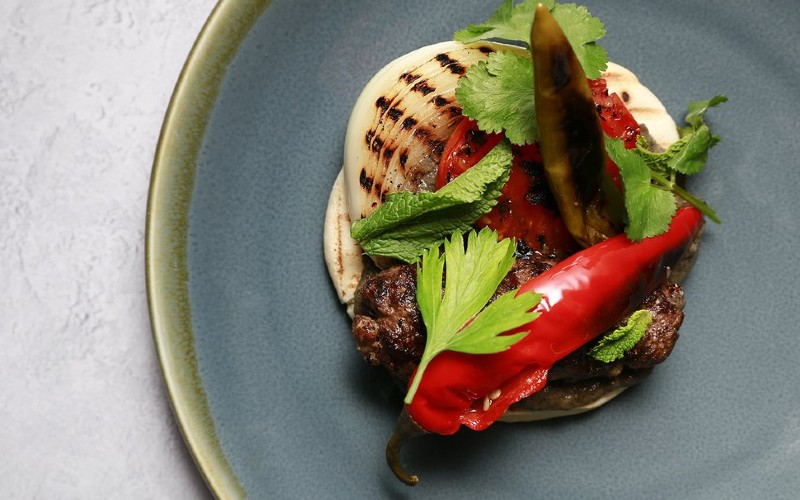 Ever-changing lockdown restrictions have forced chefs and restaurants to be creative and create different ways for you to enjoy their food outside outside of a dine-in service, meaning we’ve now got tons of takeaway options and an ever-expanding selection of DIY meal kits. Here are some of our fave new ones to get on order pronto.

Taco ’bout a fiesta. Club Mexicana now deliver their infamous vegan tacos nationwide for people to recreate in the comfort of their own home. The menu changes monthly and they make it very easy for you put the Mexican feast together. October’s Al Pastor taco box features Club Mexicana’s homemade al pastor seitan, marinated in Meriel’s secret chilli adobo sauce, and accompanied by fresh corn tortillas. Taco toppings include caramelised pineapple, red onion and a zingy salsa verde with coriander, and chilli lime seasoning. Just don’t forget to make your own margaritas to really call it a party …

This is a meal kit made in burger heaven. Two titans of the game, Patty & Bun and Shake Shack, have teamed up for this limited edition kit that blends the two brands into one juicy burger. The box, which contains enough ingredients for four burgers, includes Patty & Bun’s signature beef blend in Shake Shack’s ’Smashed’ style patties, Shake Shack’s classic potato buns, P&B’s pickled cucumbers, American cheese, and Shake Shack’s caramelised onions, smoked cheddar mayo, ketchup and American yellow mustard. It’s only available for two weeks so get ordering asap if you want one.

Treat yourself to a three course meal from Levan right in the comfort of your own home. Nicholas Balfe has launched Levan To Go, offering a seasonal set menu of small plates, a sharing main and a tarte tatin; the October menu includes chicken liver parfait, caramelised onion brioche, smoked cod’s roe with carrots, and duck confit cassoulet (and yes there is a veggie version). And it’s minimal effort to put it all together – opening the oven door really is about as it difficult as it gets, and that’s our kinda cooking.

The sun may not be out but your buns still can be thanks to this little box from Yum Bun. The hard graft has been done for you, like making the baos and cooking the mushrooms, so all you have to do is steam the buns, glaze the shrooms and get the garnishes ready. If you’ve got meat eaters in the house you can also get a pork belly bao box or a mixed one if you just can’t make your mind up.

Getting to a cinema at the mo is a bit tricky so it’s all about the at-home movie night and picnic specialists Pique have just the thing to take your Netflix screening to the next level. The Movie Night Box Set includes all the bits to make loaded nachos plus popcorn, pick ‘n’ mix, brownies and beers…yes all the cinema snacks you could possibly want.

Get a taste of The Palomar at home with their Mesahane kebab meal kit made in collaboration with HG Walter. The box contains the beef and lamb mince, fresh herbs and spices for the kebabs as well as tomatoes, onions, aubergine cream, pickled chillies and pittas to serve. If you’re not brave enough to break out the BBQ in this weather, you can whack them on the grill in the kitchen. Defo beats a dirty doner.

The Inauthentic Ramen by Supa Ya Ramen

The Hackney Road outpost of Supa Ya Ramen may have had to close but you can still get your hands on its ramen thanks to feast box delivery service Dishpatch. The Supa Ya Ramen box, which serves two, features ramen with roast celeriac, sesame miso, house chilli paste, confit tomato broth, hand-cut noodles, fudgy egg, green onions and fried garlic, plus buttered chilli sweetcorn, pak choi with ponzu vinaigrette, mushrooms in black vinegar, soy pickled cucumbers and pickled turnips on the side. All you have to do it heat the bits up and serve.

Wild Radish is a new chef-led recipe box service featuring dishes from the likes of Phillip Howard, Anna Hansen, Alyn Williams and Marianna Leivaditaki. The boxes come with the best seasonal ingredients, sourced from the chefs’ favourite suppliers, and easy-to-follow recipes and tips so you can recreate restaurant quality food at home. Each box comes with a little surprise, like fresh bread or artisanal chocolate, and you can also add on a bottle of wine matched to the dish by Matthew Jukes. One to order for the time you’re trying to impress your mates with your kitchen skills.

The Ethical Butcher (one of our LOTI Heroes) has teamed up with new fresh curry paste brand Pestle (created in lockdown by Neha Hampton) to create the British Curry Meal Kit. The box includes the Pestle pastes and meat from the Ethical Butcher to make lamb korma, chicken tikka masala and beef vindaloo, so you can whip up three authentic curries with minimum effort.

Ain’t nothing like a hearty pie when it’s pissing down with rain outside and Willy’s Pies delivers one of the best in London. The pies change weekly with just four options; one meat, one veggie and one sweet tart and the mainstay, the treacle tart. All savoury pies arrive ready-to-bake. Willy’s got big balls too, he’s grafted in some of London’s top restaurants Brat, St John Bread and Wine and Rochelle Canteen so it’s safe to say he defo delivers.

WIN A THREE-MONTH SUPPLY OF BREAD FROM KARAWAY (278)

THE YAYOI KUSAMA INFINITY ROOMS ARE COMING TO THE… (110)

ALL-YOU-CAN-EAT CHEESE AT THE CHEESE BAR (92)