In the beginning, people only moved to Clapton because Hackney got too expensive and it was just up the road. But then as more people moved there, it actually got really good, swiftly turning into one of east London’s most colourful ‘hoods.

Highlights include the weekend market on Chatsworth Road which has a range of great street food and fresh produce to buy. And there’s a ton of great places to eat any old day of the week. This is the ‘hood where Yard Sale Pizza began, plus there’s Eat 17, and great dim sum from My Neighbours the Dumplings. There’s no shortage of excellent (and very spacious) boozers too: check out the Clapton Hart and The Princess of Wales.

One of our favourite Clapton institutions has to be the beautiful Castle cinema and when we’re in need of a fitness boost, BLOK is our first port of call. Blue Tit, one of London’s best hairdressers, have a salon here plus there’s a ton of other great shops including Darling & Gold, and Lion, Coffee, Records. 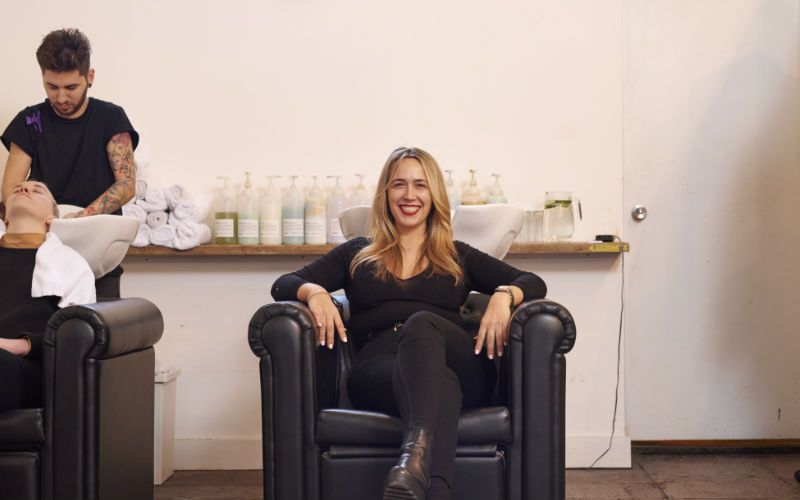 Rolling hair, beauty and vintage into one, Belli Fuori sees owner Gio bring her Italian style and influence to Clapton. Involved in the industry since she was very young, six years old in fact, Gio has an old school family approach and that means getting to know their clients. The prices are decent and the shop also offers a range of beauty treatments and massages. With a love of art, Belli Fuori provides a space in the salon for independent artists changing every three months. The handpicked vintage clothing? It all comes from Italy and you can find some gems there. More than just a salon isn’t it? 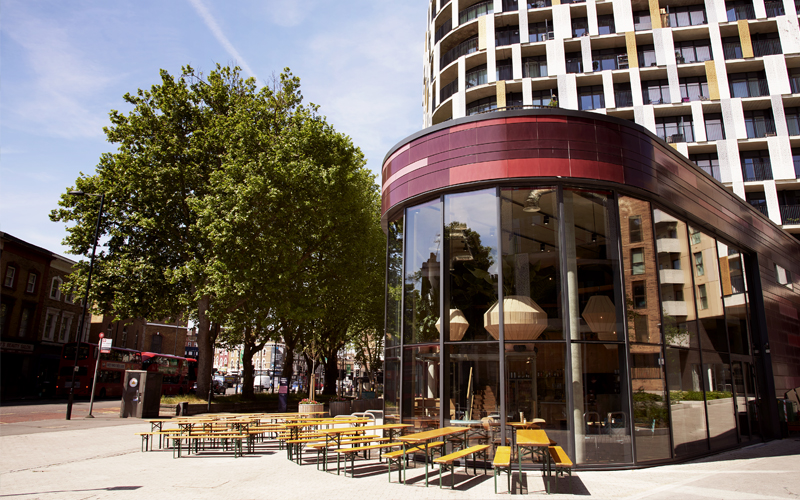 The Vincent comes from the guys who used to run the Sebright Arms and it’s an all-dayer done right. From coffee and pastries in the morning to slow-cooked ribs on Sundays, they do it all and THAT buttermilk fried chicken burger is the bomb. With alfresco dining on the terrace and craft beer aplenty, it’s the perfect spot to sink a few beers too. 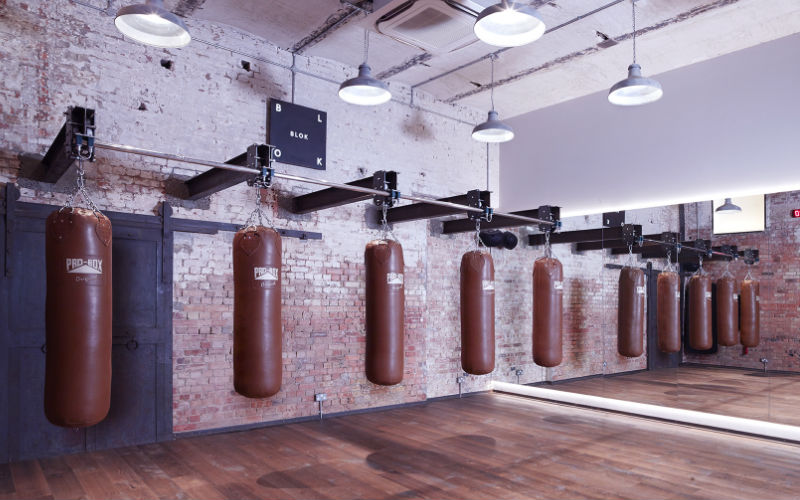 BLOK is not your average gym. The two London locations – one in a converted Victorian tram depot in Clapton and the other in a swish new build in Shoreditch – are luxury concept fitness spaces with the identity brought together by property developer Ed Stanbury and fashion photographer Max Oppenheimer. BLOK is a place to train hard and build up your fitness skills. The instructors want you to feel inspired, not just sweat hard and leave, although you most definitely will sweat hard. The classes range from intense HITT sand Primal Movement to the restorative Barre and Yin Yoga, along with a range of different boxing options so you’re sure to get a thorough workout. And once you’re done working on your bod, you can exercise your mind with a look at their evolving exhibition space. 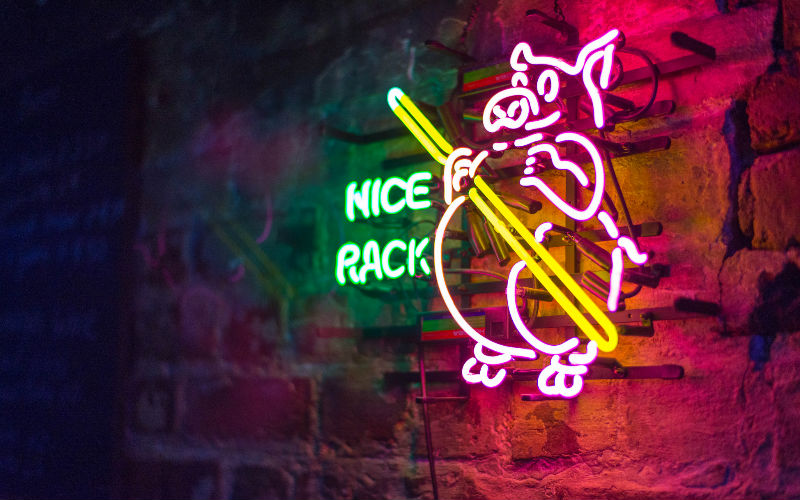 Hidden away down an old alley way you’ll find Blondies, a dingy dive bar. Set up by four blonde sisters, the super chilled space shakes up a selection of classic cocktails with a twist, along with some cheap beers and borough wines. With a mysterious history, the bar sits in a WW2 bomb site and more recently an old money store, which explains all the interesting fittings and fixtures. After nine near death experiences building Blondies, the sisters have put their blood, sweat and tears into making this one of the most fun hangouts in Clapton. 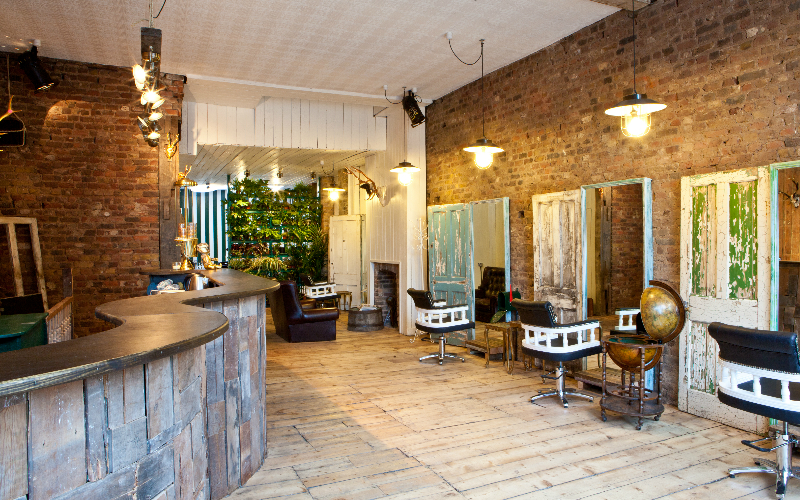 Since opening in Clapton, Blue Tit have spread their wings all over town. But this salon has a very different feel to the rest of ‘em with founder Perry taking inspiration from his travels to build the salon. All the furniture comes from antique markets, reclaim yards and the parquet floor even came from eBay.

Bringing the best of both worlds with a couple of vintage armchairs and an open fire upstairs, it’s like you’ve stepped into someone’s cosy living room, but then downstairs you can find their swishy curved photographic studio. All about the experience, you won’t just be getting a bloody good haircut or colour at Blue Tit, but beer, snacks and probably some new friends too. 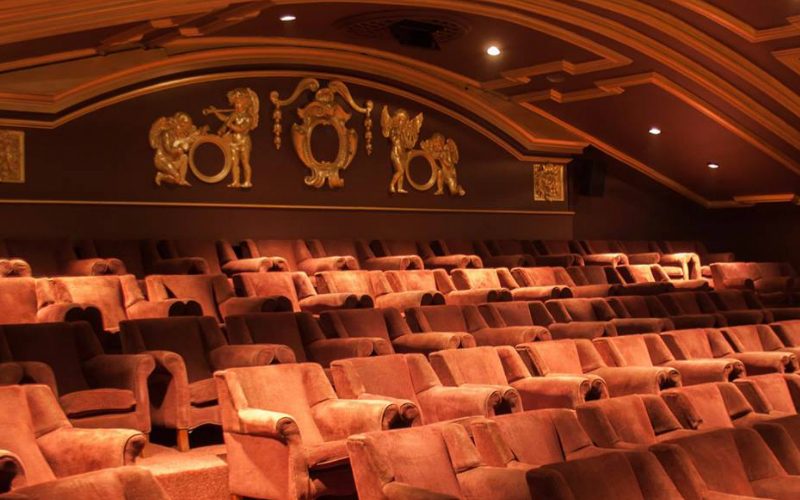 From a single-screen cinema in 1913 to a bingo club to a warehouse to a snooker hall to that top bit of Eat17, the Castle Electric Theatre on Chatsworth Road has enjoyed more extreme makeovers than most, and now it’s come full circle. Ash and Dee from Pillow Cinema are the ones who turned back the clock, and after an epic crowdfunding campaign The Castle is a cinema once again. More than 50 years since the last film was played, it screens a range of new releases and cult classics. 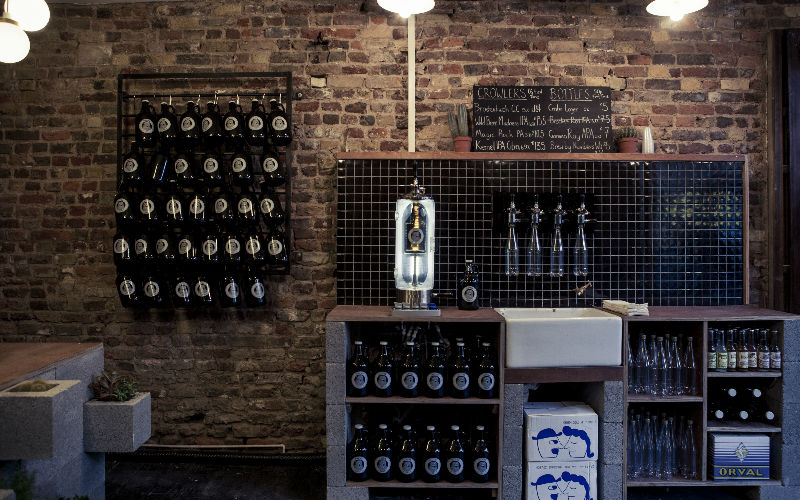 Tom and Will, the guys behind Clapton Craft, just want you to be able to drink your fave beers, whenever you want, wherever you want. How nice is that? Celebrating all the great local brews from London and the rest of the country, plus some of the best international bevs, Clapton Craft sells beer by the bottle and by the growler…that’s a 31/3 litre container FYI, straight from the keg. And their nifty filling system keeps it fresh for up to six weeks, though we highly doubt anyone’s managed to leave beer undrunk for that long.

Whilst the beer is the star attraction, the brand’s bear logo runs it pretty close in terms of popularity. Designed by Tom’s housemate Natassia and inspired by Wojtek, the beer drinking, WWII Polish Army soldier bear, it’s spot on. Bear merch and growlers full of beer, pretty bloody cool if you ask us. 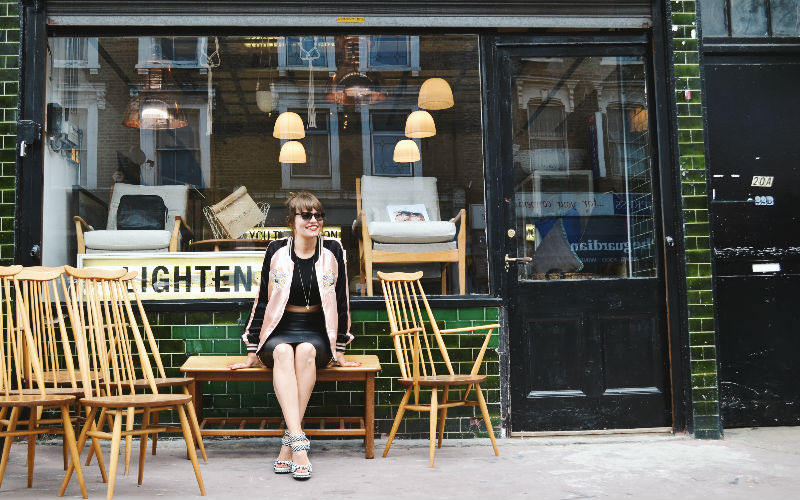 In what once used to be an old pie and mash shop you’ll find Darling & Gold, a vintage boutique. Bought to life by Holly and her husband, who share a love of all things interior, the shop takes inspiration from mid-century Scandinavian style and is overflowing with antiques and reclaimed homeware. Selling anything and everything from a 1950s pommel horse turned into a bench to organic locally produced body scrub to leather handbags and even some undies, it’s a proper little treasure trove. 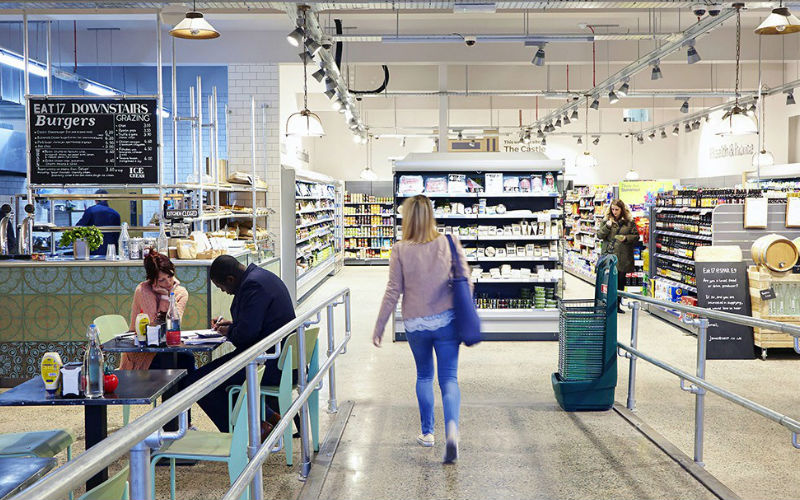 Eat17 isn’t just a supermarket, it’s a grocerant – that’s a hybrid of the best local suppliers, staple Spar products, butchers, bakers, florists and restaurants together all in one place. The famous Eat17 Bacon Jam can be found here (that’s onion jam having a love affair with smokey bacon), sushi by Ohba Leaf, refillable wine stations as well as all your daily essentials. The Clapton branch inside the beaut Art Deco building that’s also home to the Castle Cinema and the Walthamstow branch even has its own restaurant, home to the famous Eat17 cheeseburger. 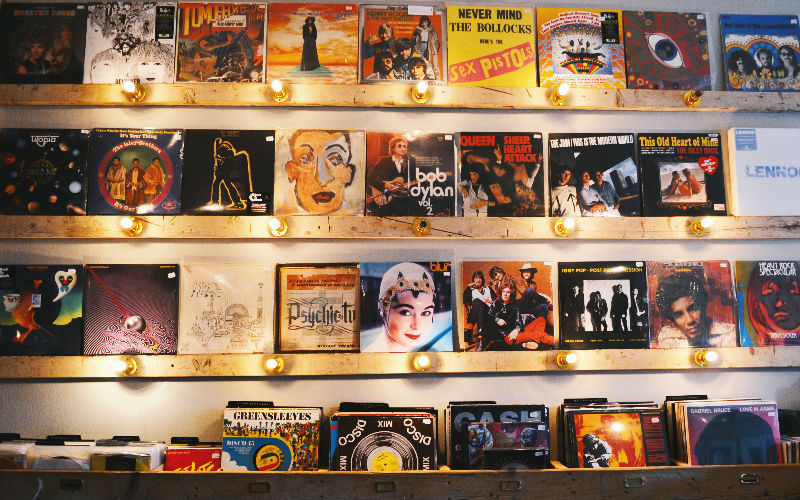 Lion Coffee & Records is all about, you guessed it…coffee and records. Set up by Chris Hayden (Florence and The Machine’s drummer), Mairead Nash (Owner of Luv Luv Luv & Hate Hate Hate Records) and Lee Rigg, the space does a lot more than what it says on the tin. With a whole host of in-store gigs, art exhibitions and even the odd supper club on the bill, you’ll be roaring for more. Plus there’s all sorts of exciting exhibitions from artists donning the walls…this place is drenched in rock ‘n’ roll. 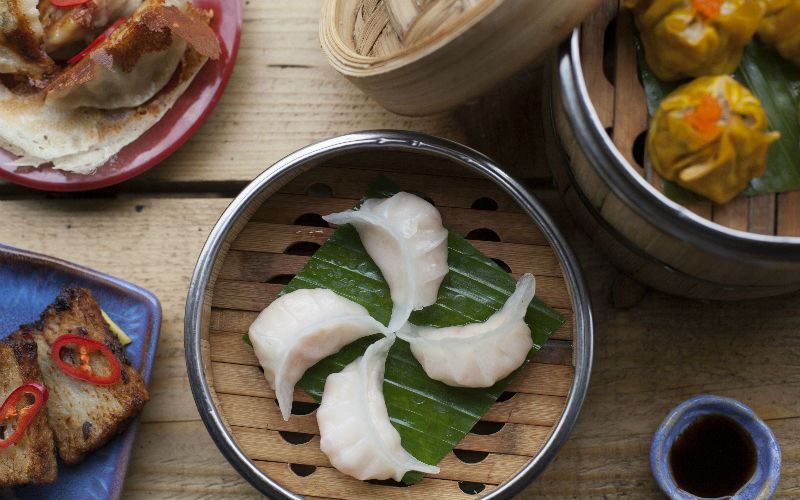 MY NEIGHBOURS THE DUMPLINGS

My Neighbours The Dumplings is an intimate, simple space that serves up handmade dumplings and home-cooked Asian dishes. Making waves running a pop-up in Hackney, this is their first permanent home with informal interiors and shared communal tables. The crispy prawn wontons are addictive, Shumai are the signature (and rightly so) and if you luck out and there’s belly pork on the specials menu when you visit be sure to order it. Besides the food, you can also find Chinese teas and sake on offer. 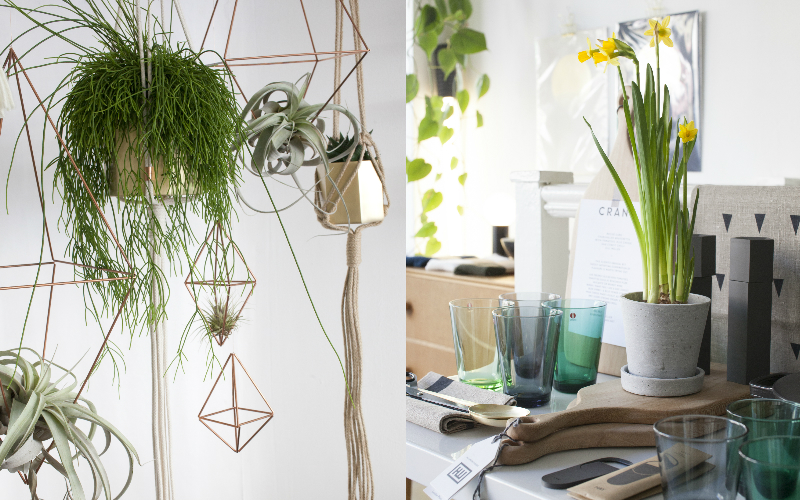 With care and passion in bucket loads, design-led lifestyle store Triangle is all about bringing independent and local designers together. The brains behind the shop, Matt, Tory and Mary, all have backgrounds in different aspects of design. Going above and beyond the trio regularly visit vintage markets in Belgium and Holland and have called upon their friend, jewellery designer Karin Andreasson to create a unique collection for the store. Stocking everything from glassware and textiles to handmade jewellery and vintage furniture, each item has been handpicked, so you’ll never see the same thing twice in this place. Like a little treasure trove, you’ll leave feeling inspired and probably want to redesign your whole home. 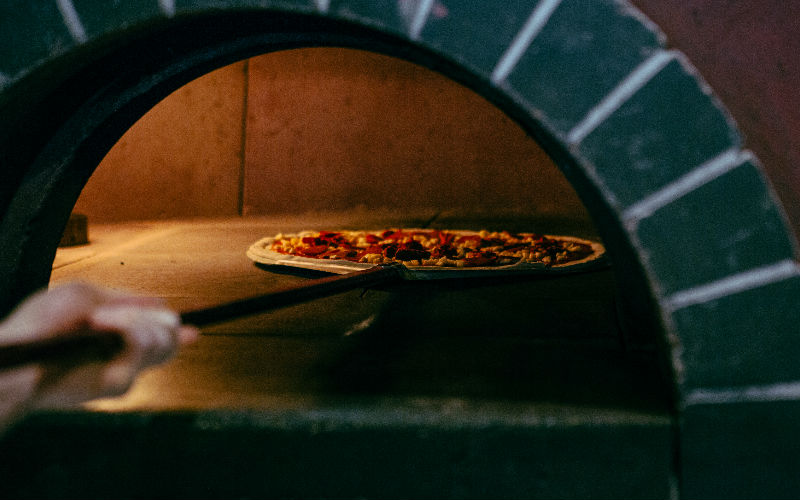 A Yard Sale Pizza is kneaded in everyone’s life. After kicking things off with Macaulay Culkin doing a set at their opening, Yard Sale set the standards high. But leaving their dough to prove for 24 hours and cooking out their tomato sauce on the pizza to deepen the flavour, they definitely aren’t ones for cutting corners. Whether you wanna dine-in or take-out these handmade beauties are available as 18-inch sharers or 12-inch pizzas and can be found across East and South London. From the regulars to the guest pizzas, whether you’re holy over your pepperoni or all over the squash, Yard Sale is where to get a pizz’a the action. 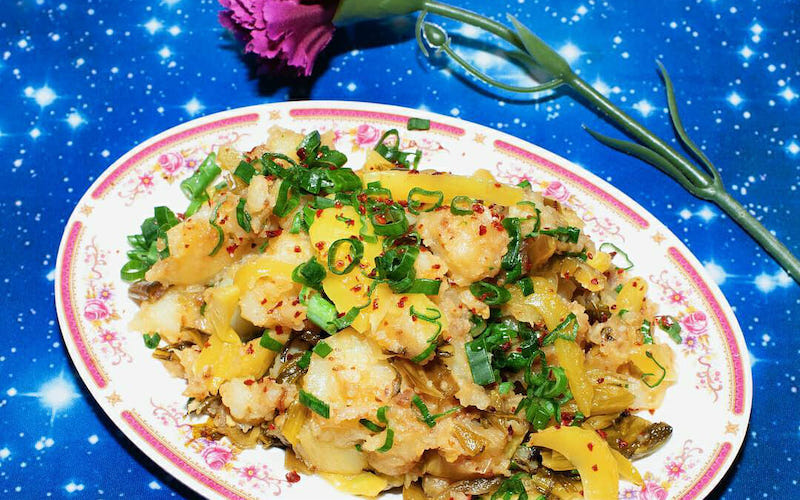 Ellen Parr and Pete Kelly have been popping up across town for the past few years with Lucky & Joy and now the duo have opened a permanent place in Clapton, just a few doors down from Yard Sale Pizza and P Franco. There’s a retro, kitsch aesthetic, with check box menus, bright neon chopsticks and colourful artworks on the walls so it’s a fun place to be.

On the menu, you can expect similar Chinese-inspired dishes to those served up at the pop-ups, with all ordering done via a paper checkbox system. We’d definitely recommend the cold sesame noodles, the cumin-drenched mushroom skewers, the roasted aubergine, and the amazing fried brussel sprouts chopped with plenty of chilli and coriander. We also love the fresh spicy salads such as the Yunan smacked cucumber and the tiger salad (tip: keep both the bowls with all the extra dressing and pour it over your rice at the end). 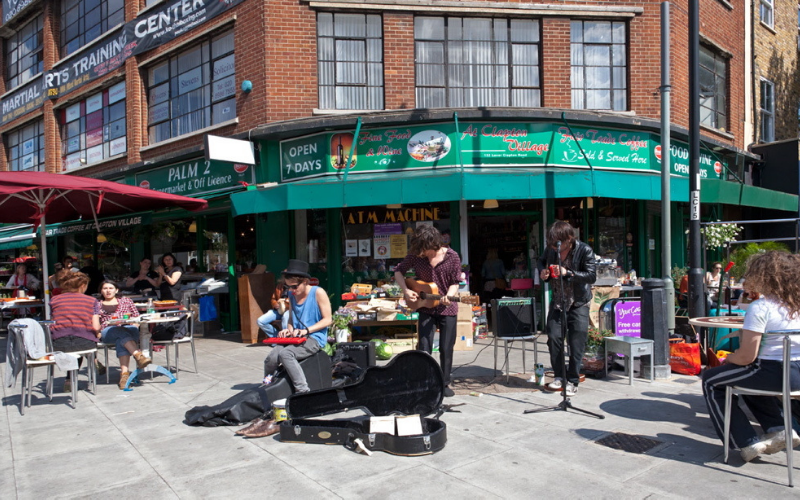 The organic shop in Clapton has produce from around the world from oils to cheeses and everything in between. This is a proper community space for food lovers and they regularly host workshops from dabbling with essential oils and plant-based nutrition. 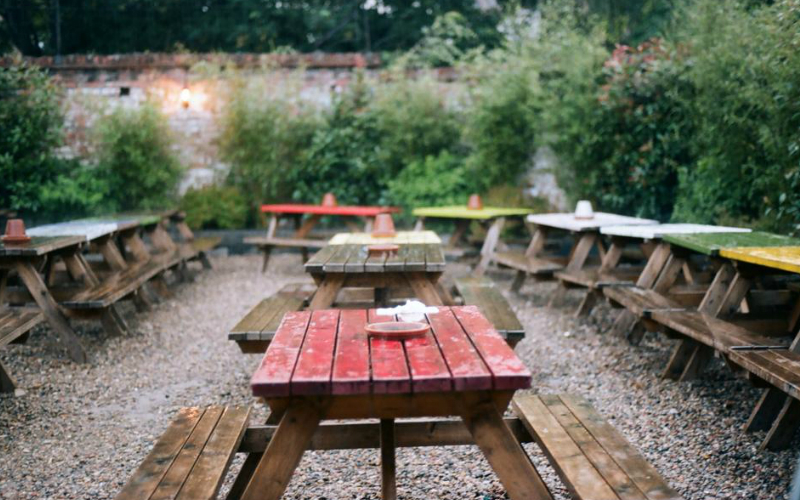 Whoar this is a big pub. HUGE. Just off the roundabout in Clapton, this is a great watering hole with excellent beers, including local brews and guest ales and it also knocks out decent food. You’ll find people drinking both out the front and the back…do check out the beer garden. You can have a bit of a dance with DJs on weekends too. Banging pub.