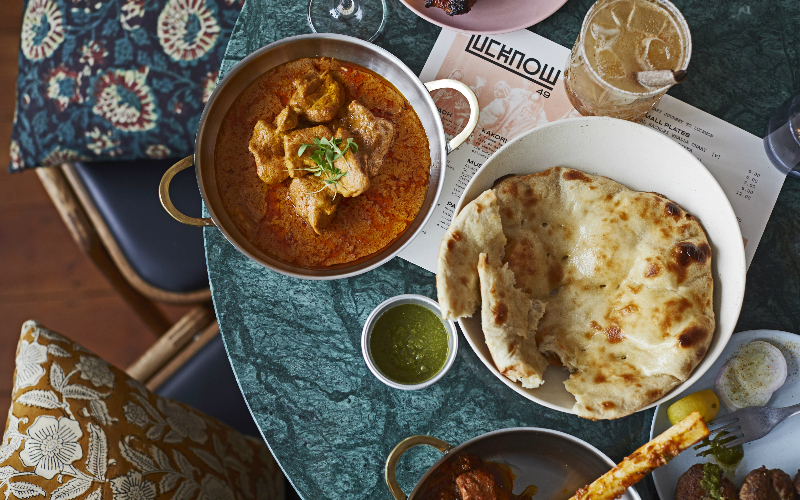 Lucknow 49 is the second restaurant from Dhruv Mittal, the founder of DUM Biryani, and it’s all about the low and slow Awadhi style of cooking found in Lucknow. The north Indian city was the capital during the Mughal Empire, so it’s got a strong food tradition, which Dhruv was inspired by during his time working as a chef in the nearby city of Agra.

It’s a tight menu, mainly of curries and biryanis, with meats cooked over charcoal to start. From those meats, we went for the saffron tikka chicken thigh and the galawat kawab, incredibly soft spiced beef patties allegedly invented for a toothless noble. They really were so soft that they melt in the mouth, no chewing required. Both the chicken and the beef are well-flavoured on their own but they’re punched up even more thanks to the green chutney that comes on the side. The kitchen’s not afraid to be bold with the spicing and we like that.

As this restaurant comes from the same team as DUM Biryani, we had to try one of the biryanis on offer and the Awadhi goat one, with slow cooked chunks of meat nestled in between the layers of rice, did not disappoint – fluffy rice, tender meat and just the right level of fragrance. And it’s even better with some of the excellent makhani dal on the side. The taar gosht, slow cooked spiced lamb leg, was recommended to us, and though tasty we felt slightly shortchanged regarding the amount of meat in relation to sauce.

There’s only one dessert, a saffron and almond kulfi, on the menu at the moment and quite honestly, you don’t need anything else – it’s sweet enough to satisfy your pudding cravings and light enough to leave you able to walk out the door.

London’s not short of great Indian restaurants – there’s another two (Bombay Bustle and Kanishka) on the same street – but with the focus on slow cooking, Lucknow 49 really does have something different to offer.