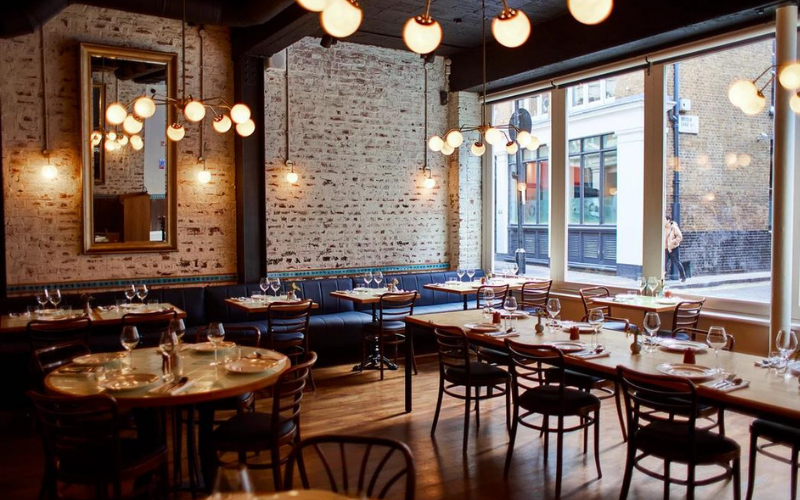 Yeni, opened in Soho by Cem Bilge and chef Civan Er, the founders of Yeni Lokanta in Istanbul, opened on Beak Street in 2019. We never made it to the restaurant when it opened, and then a little thing called the pandemic happened, but with the launch of a new menu, now seemed like the perfect time to go and check it out.

It’s a lovely space with double-height ceilings, whitewashed brick walls, hand-blown glass chandeliers, Levantine tiles adding pops of colour, and an open kitchen at the heart of the room, all combining to transport you to Turkey as soon as you step inside. That’s continued on the menu, which is a modern take on Turkish food that draws inspo from Civan’s childhood in Istanbul and the rich history of Anatolian cuisine.

There’s a carte blanche option if you want the chefs to do the choosing for you but if you go a la carte as we did, the only way to start a meal at Yeni, besides with one of their G&Ts with house-made tonic, is with some freshly grilled Tava bread and smoked butter. In fact, you might need a couple of orders of this coming throughout the meal for mopping up duties. You’ll definitely want some for the double fermented yoghurt sauce that the beef manti dumplings come in – it’s got a real funk and depth of flavour, tasting almost like Marmite, and you won’t be able to keep your spoon out of it.

The citrus salad with pomelo, orange, grapefruit and fennel, topped with spicy sour cherry sorbet is another must-order. The sorbet adds another dimension to the already fresh and zingy salad, and it’s great paired with some of the meat dishes cooked over the wood fire, especially the duck breast with chickpeas – duck & citrus is always a winner – but it works well with the lamb too. The cut changes often, on our visit it was shoulder, which had been slow-cooked so it was super tender, with tamarind and chilli giving extra richness. There’s something for the veggies too in the aubergine with stilton, figs, port and smoked almonds, which hits salty, sweet, soft and crunchy all at once.

They certainly don’t pull any punches when it comes to flavour at Yeni but the delivery of the plates could have been better – there were noticeable gaps between some of the dishes coming out, so it didn’t quite come together as a cohesive meal, but we enjoyed what we got when we got it nonetheless.