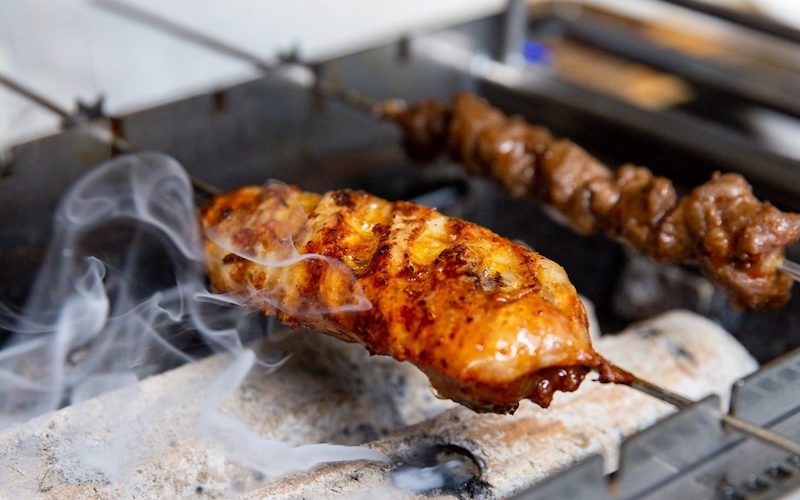 DIY Korean BBQ is a bit of an underrepresented restaurant genre in London, but there’s a new opening in east London, Yanji, that’s hoping to put that right. Yanji is on Bethnal Green Road (more on the Shoreditch end) and is a fairly small site, with most of the room taken up by big seating booths that have a grill in the middle plus a big extractor pipe hanging overhead. While you could go as a two, or even on your own, Yanji is really a place where you want to head in a group of four so you can try lots, and take turns grilling. For bigger groups, there’s even a couple of private dining rooms in the basement.

The menu has starters and mains that are cooked in the kitchen and bought out as you’d expect. From the starters we were big fans of the stir fried rice rolls that came in a sweet spicy sauce, the BBQ aubergine, and the kimchi pancake, both of which made for a good accompaniment to the grilled skewers, which were up next.

When you order your skewers, the team will place the grill with the hot coals in the middle of the table and show you how to use it. We went for a mix of Yanji’s speciality, the beef and lamb skewers, both of which were excellent. We usually can’t be faffed with DIY restaurants but at Yanji it’s super easy, as the skewers rotate automatically so you can just sit back and let them slowly cook. For more adventurous types, there’s lots of other skewers to choose from, including chicken hearts, beef tendon, and pork ear.

We were big fans of Yanji – it strikes a good balance between a bit of fun cooking a few skewers but there’s also plenty to choose from the kitchen too. The quality of the ingredients definitely shines through too. If Korean is a cuisine you’re not massively familiar with, we can recommend giving Yanji a try.

HOW TO THROW A BIRTHDAY PARTY IN ISOLATION (106)

10 PHOTOS OF A DESERTED LONDON DURING LOCKDOWN (27)