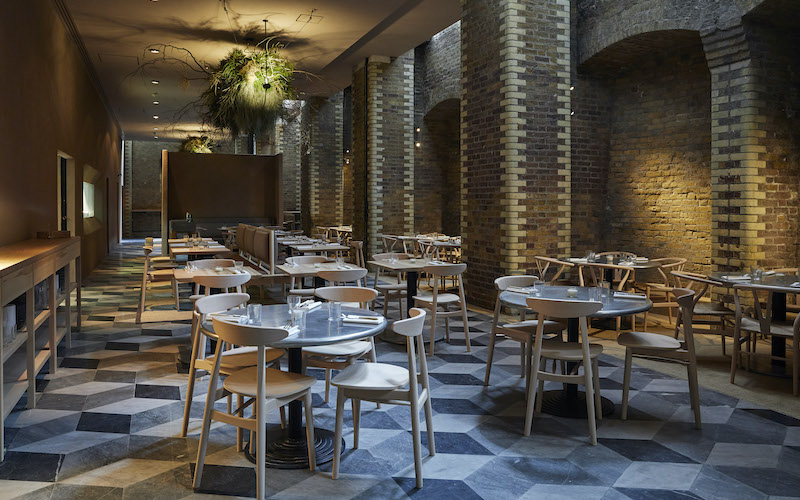 Despite Albion and the Rooftop Bar & Grill always doing well, the basement space at Boundary in Shoreditch has been a tricky one to get right – the last restaurant Tratra only lasted two years. Now Sir Terence Conran has brought in Richard McLellan (formerly of Typing Room and Alyn Williams at the Westbury) to have a go with Wilder.

Wilder opened towards the end of October, gaining good early reviews from Fay Maschler and Jimi Famurewa. Having been big fans of Typing Room, we were looking forward to checking this out, and we finally got around to it at the end of February.

The restaurant space is still as cavernous as it always was, with the exposed brick walls and the high ceilings, but it’s been divided up well with a bar at one end and the dining room positioned in front of the kitchen. The bar programme has been designed by the team behind Little Mercies so it’s definitely worth stopping by before dinner for an Apricot Highball.

In the dining room the glass walled kitchen allows you to glimpse the chefs at work, as well as piles of fresh ingredients on display. Wilder has a definite focus on British ingredients, with produce like trout, crayfish and watercress coming from Sir Terence’s Barton Court estate in Berkshire.

Unlike Typing Room, which was tasting menu-led, things are more informal here, with a short a la carte menu of seasonal plates. As native northeners, we were very excited to see a snack of seeded crackers with pease pudding on the menu and we kicked off with this and a glass of natural fizz (there’s an excellent wine list curated by Head Sommelier Lucy Ward).

Other must orders in our book include the rich hen egg, chanterelles, caramelised turnip, and chestnuts – the perfect starter on a chilly evening – and the beef tartare with mushroom, beer onion, and beef heart. A main of turbot, mussels, leeks, and wild garlic was excellent, trumped only by the fallow deer with parsnip, kohlrabi, and kale. For dessert, it has to the Yorkshire rhubarb with white chocolate and buttermilk.

We were seriously impressed by the cooking, the cocktails, and the wines at Wilder. If you were a fan of the Typing Room, we’re certain you’ll like this place, and if you never made it there, we’d definitely recommend giving it a try next time you’re after a proper restaurant experience in Shoreditch.

Get Me There
February 28, 2020 by christina
eat + drink, food review, LOTI eats, shoreditch