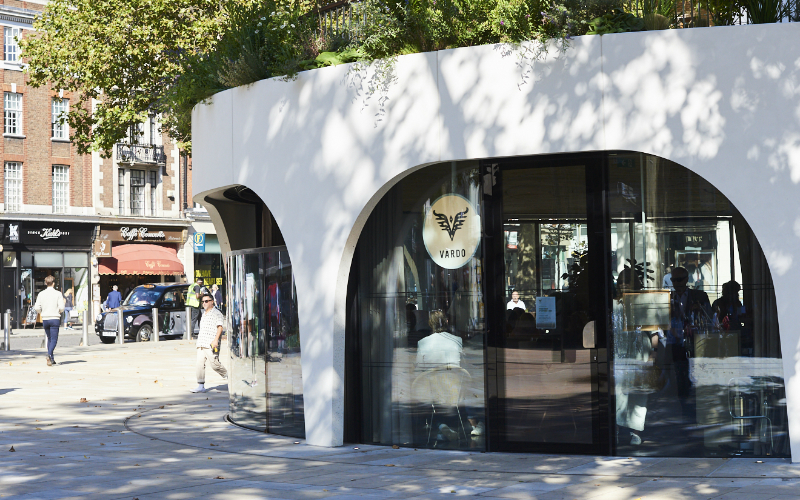 Caravan has gone west for the first time and opened a new restaurant in Duke of York Square. However, it’s not just another Caravan, though the travelling link is still there. This one is Vardo, named after the Romani wagon of the 1800s, and it’s taken over a three-storey cylindrical stone and glass pavilion in the square. It’s actually a very cool building; all gentle curves and muted tones inside and the glass wall is fully retractable, which is admittedly not much use right now but should really come into its own in the summer.

Like Caravan, the menu at Vardo draws influences from across the globe with a focus on low and slow cooking techniques. If you’ve been to Caravan before then there’s a lot here you’ll recognise including the jalapeno cornbread with chipotle butter and lime, and the jamon and San Simon croquettes with saffron aioli. We’re happy to report they’re both just as good as we’ve had at any of the other sites before.

Save for the pork and chive potstickers with black vinegar, which had a nice little kick thanks to the lake of chilli oil, they came sat in, the rest of our meal was very much a Middle Eastern affair, though there are Asian-inspired grain bowls and European flavours on the pizzas.

The vegetable section of the menu is strong as well as varied, so there’s lots for non-meat eaters to get stuck into. We particularly loved the slow-roasted carrots with brined mustard greens and ajo blanco and the earthy roasted jerusalem artichokes with green tahini. The absolute star of the show though was the spiced pulled lamb shoulder; folds of soft meat sat on a rich swirl of tahini and topped with mint pesto and little pops of pomegranate. The caramel soft serve with espresso caramel and hazelnuts is all you need to finish – sometimes there really is nothing better than ice cream.

Vardo may have been billed as a separate concept to Caravan, although apart from the fact that there’s not such a focus on coffee here, it’s really not that different at all. That’s definitely not a bad thing mind, Caravan nails the ‘globally inspired menu’ concept and the group has another hit on their hands with this wagon out west.

Get Me There
October 31, 2019 by christina
chelsea, eat + drink, food review, LOTI eats