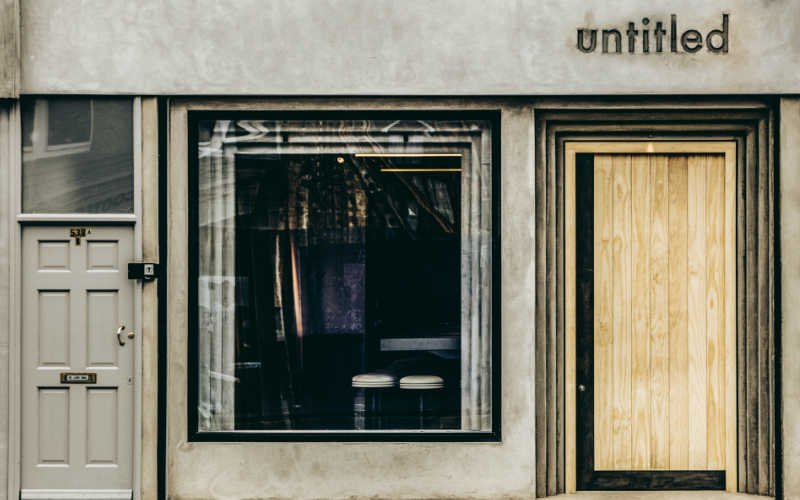 We’ve been fans of Untitled – Tony Conigliaro’s cocktail bar in Dalston – since it opened but as we’ve only ever been in for drinks before we decided to give the food menu a go, with a few cocktails on the side for good measure.

Inspired by Andy Warhol’s Silver Factory, the place looks very cool indeed with concrete walls, a huge communal table in the middle and a rotating display of art. Out the back they recently opened the Asahi Moon Garden, which is very zen… no easy feat on Kinglsand Road.

Rob Roy Cameron has created a contemporary Japanese small plates menu, which you can either pick and choose from or you’ve the option to share the whole thing between two. We went for the latter – it saved us making any decisions and was spot on in terms of quantity.

Out of the ten dishes we had, the standouts were mussels and leeks sat in a yuzu beurre blanc, which was so tasty we could have had a giant bowl of it; savoury and sharp pickled mushroom yakitori; succulent lamb, ginger and shiitake stuffed inside brioche, like a richer version of a bao bun; and insanely moreish boneless chicken wings in a sweet kimchi sauce… an absolute must-order.

Rob Roy Cameron also does a one-off monthly tasting menu with more creative dishes on show, adding the most popular ones to the a la carte offering. If you’re looking for Japanese food with a bit of twist, not to mention some top notch bevvies, this is the place.