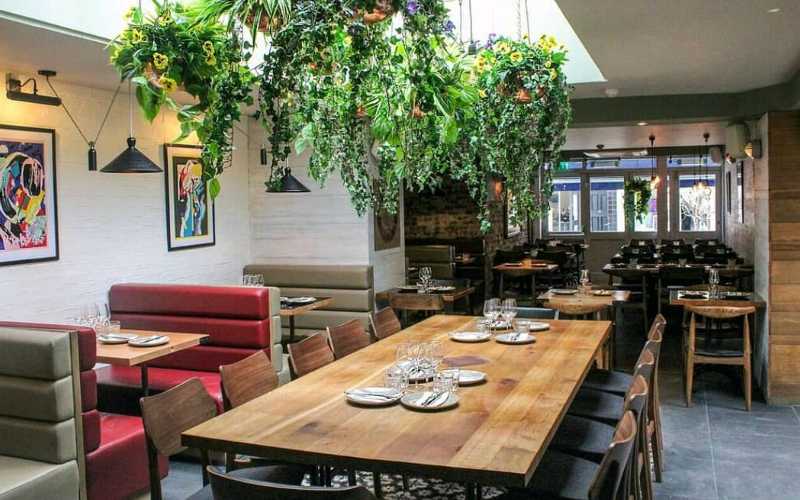 The Distillery, London’s first gin hotel, opened on Portobello Road back in 2016 and now they’ve made the move eastwards with sister site Tonica. The bar and restaurant has got a plum spot on Exmouth Market, and is a double-fronted space with the bar running down on side and tables and booth seating on the other. The place looks great thanks to a mix of exposed brick, light wood and copper accents, and there’s one great large table underneath a skylight and a canopy of hanging plants.

The food is inspired by The Distillery’s Spanish restaurant GinTonica, so it’s a tapas menu of snacks, cheese and charcuterie, small plates and puds. The classics like jamon croquetas, padron peppers and patatas bravas are done well and it was these, along with simpler dishes like orzo risotto with truffle, chargrilled octopus with potato salad, and a great pud of flan topped with roasted peaches and sherry caramel that were our highlights.

Some of the tapas was on the small side, which was fine sharing between two but would require some double orders if you went in a bigger group. Though you can easily have a full meal here we think it works better for occasions when you want some plates to pick from whilst you work through the drinks. Naturally gin is at the heart of the list, with the Gin and Tonic Plus (G&Ts taken to the next level with extra liqueurs and garnishes), being the signature serve.

The Rives Special with dry vermouth, olive bitters and rosemary, and the Portobello Road Gin 171, featuring pamplemousse liquuer, grapefruit marmalade and blue tonic were our faves, and yes we did try all four, for research purposes of course. And just in case gin ain’t you thing, they’ve got a load of Spanish wine, port, sherry and vermouth behind the bar so nobody will be going thirsty.

Tonica also has a working still room in the basement and a Ginstitute programme of events is slated for the later this year, so it’s gonna be saving a lot of East London gin lovers a trip across town.