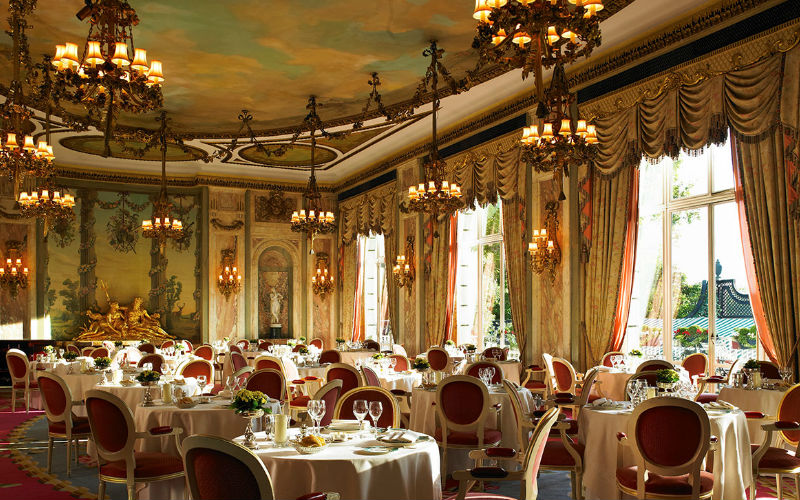 London has its fair share of iconic, world-famous hotels but The Ritz arguably trumps them all. The grand Grade-II listed building on the edge of Green Park has been around since 1906 and as you step inside, it feels as though not much has changed since then, with its decadent furnishings modelled on the grand old hotels of Paris. Nowhere does this feel more true than the dining room with its chandeliers, thick curtains, painted ceiling and classical sculptures – there aren’t many dining rooms in London like it and although it’s not exactly the design-style of today, it’s an amazing place to spend an evening; a pure piece of dining escapism.

Despite its reputation for all things grand and luxurious, The Ritz never held a Michelin star until it was awarded one in 2016 under the stewardship of Executive Chef John Williams, who joined the hotel in 2004. John’s refined menus are befitting of the space, beautifully presented classic French dishes that still feel fresh and modern enough to hold their own in London’s innovation-hungry dining scene. We went by for dinner and selected the Menu Surprise, consisting of six seasonal courses selected by John Williams, which at £105 is by no means bad value by Michelin London standards.

We kicked off with a glass of the Ritz’s own-label champagne and the obligatory bread and butter – but this is bread freshly baked in the dedicated Ritz bakery downstairs, and a circle of fresh butter emblazoned with the Ritz logo. After some canapés – thin beetroot crisps shaped like leaves – came the first course proper, chicken liver parfait served with warm brioche and rhubarb, which cut through the rich mousse nicely. Then came juicy langoustine in a rich seafood broth and grilled fennel, and then possibly our favourite course of the night, salt baked celeriac with a dollop of goat butter and a rich truffle and veal jus.

Two epic mains followed, one fish, one meat. The first was a big fillet of turbot with white asparagus and morel mushrooms, the next a hay-aged bresse duck, which had been stuffed with hay and juniper and served with apricot puree and duck jus – a pretty incredible dish.  We just about found room for dessert, a classic chocolate soufflé served with vanilla Chantilly cream, which was a perfect end to a four hour dinner of pure indulgence.

The Ritz is one of London’s finest hotels and dinning rooms. For those nights when you are celebrating a proper special occasion and nothing less than white tablecloths, chandeliers, and Michelin-starred French cooking will do, there’s no better place to be.