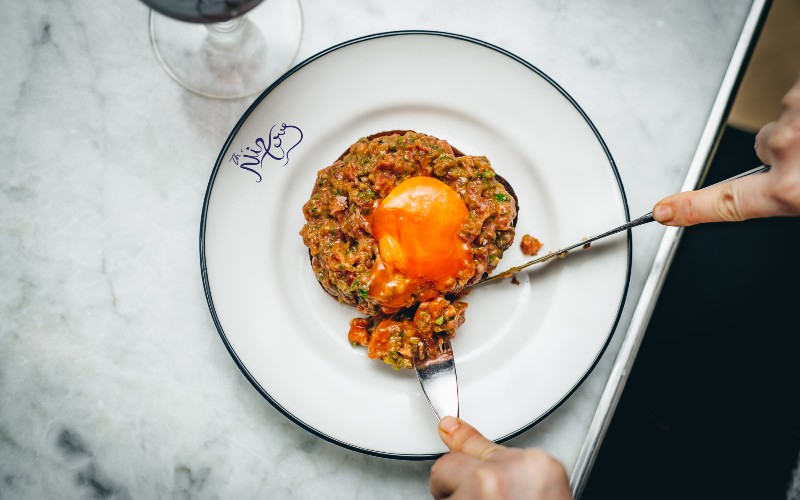 After Asia de Cuba closed this time last year, there’s been no permanent replacement for the restaurant inside St Martins Lane London. First St Martins Lane Kitchen took over the space and now chef and food writer Gizzi Erskine has popped up there with The Nitery.

Inspired by the bohemian restaurants that popped up in Paris and Atlantic City in the early 20th century, the restaurant is serving up a broadly French menu, with some American and British influences. And if you’ve got Gizzi’s cookbook Slow: Food Worth Taking Time Over, you’ll recognise a couple of the dishes.

After snacking on the devilled eggs with roast chicken scratchings with a a round of cocktails – the Twelve Midnight is so good it converted a non-gin drinker – we started with the scallops, served in the shell and swimming in a potent green garlic butter, and the steak tartare with bone marrow dripping, Marmite and a cured egg yolk on a thick piece of brioche. Marmite makes everything better (we’re lovers not haters) and this is up there with one of the best steak tartares we’ve had.

Continuing down the indulgent route, we went for the Toulouse sausages on rich puy lentils and the Calasparra rice with wood-fired shellfish – the bisque is already absolutely packed with flavour but it gets even better when you squeeze out the juice from the fat carabineros prawn heads all over the rice. This is fast becoming one of the signature dishes and it’s easy to see why.

The queen of puddings is another one that’s getting a lot of love on the ‘gram at the moment but we could only manage to share the sherbet lemon meringue pie between two. If you like your lemon desserts so lemony that your face squeezes up when you eat them then this is one for you.

The Nitery is only in residence in the hotel until the end of April, so you’ll need to book in pretty sharpish if you want to try it out. We very much hope it reappears somewhere else in more of a purpose-built space as she’s got a good concept and some cracking dishes on her hands.

ELECTRIFY YOUR RIDE WITH AN EBIKE CONVERTER (3)