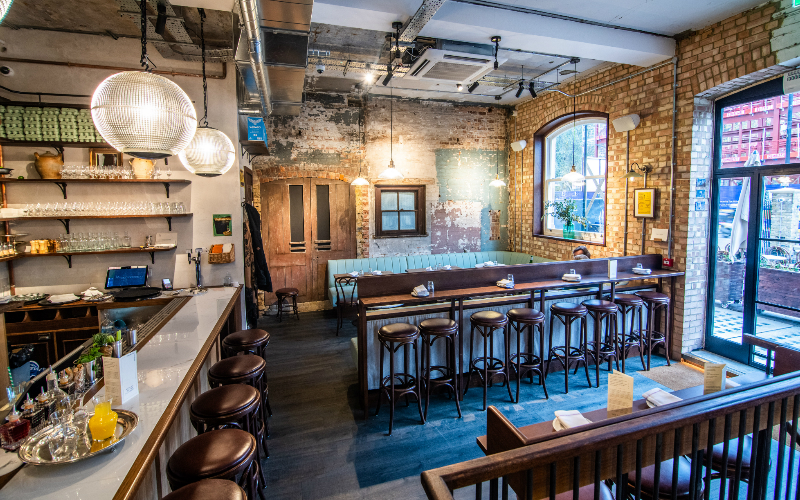 Melanie Brown, the woman behind The New Zealand Cellar in POP Brixton, has opened an all-day bistro and wine bar, The Laundry, just the other side of Brixton Village on Coldharbour Lane. She’s taken over Walton Lodge, which used to be a commercial steam press laundry (hence the name) but has kept the original brickwork, mixing in vintage furniture, antique mirrors, counter and banquette seating, and a wall stacked with wine.

The place filled up pretty quickly on our visit – very good going for a rainy weeknight in January – which made for a great atmosphere. And if you’re looking for somewhere down south to impress a date, this is it.

Aussie chef Dylan Cashman is in charge of the kitchen and he’s used local, seasonal produce to create a menu that’s interesting but still comforting. The pork and carrot croquettes are great to snack on – you could easily pop in for a few rounds of these to with a couple glasses of wine- and don’t miss the smoked fish bacalau either. Essentially its the texture of mash but made from fish instead of potato, and you’ll find yourself scraping the bowl with the crisps that come on top.

We also loved the charred gem lettuce with parmesan whey, cured egg yolk and bonito flakes, which had all the flavours of a Caesar salad; the rare breed pork with wild mushroom sauce (mopped up with a side of sauteed rosemary potatoes) from the specials board; and the warm chocolate chip cookie with ice cream. The other desserts sound good but trust us, this is the one you want.

The 50-strong main wine list features bottles from old and new world regions, so there’s plenty of choice, but it’s really worth asking for a recommendation. The staff are super friendly and really know their stuff – we were directed to a Giovanni Rosso Langhe Nebbiolo based on what we’d ordered and it went down an absolute treat. If you’re after something a bit fancier there’s The Cleaner’s Diary, a small selection of fine wines handwritten in a thick leather bound book. It is actually worth taking a look as, although the wines available are premium, the prices aren’t too scary.

The Laundry is already a hit with the locals and rightly so. It’s a great addition to Brixton and to the city’s wine bar scene as a whole, and it’s only going to get more popular when warmer weather brings that large terrace out front into play.