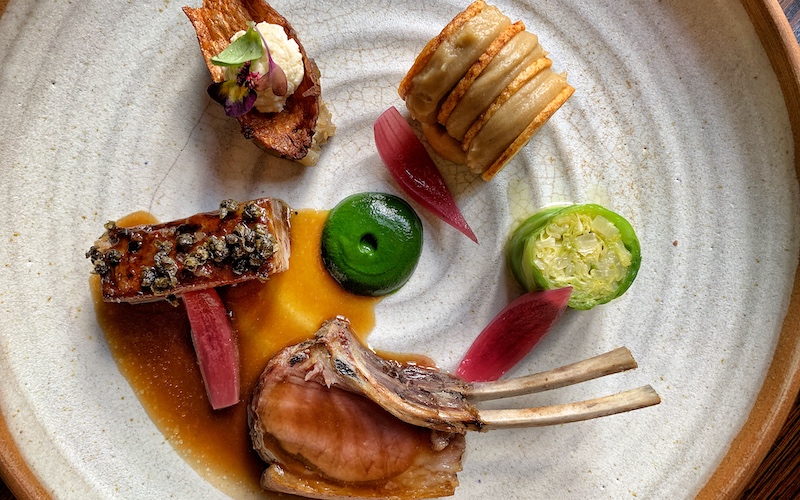 Although London restaurants are our speciality, we like to keep an eye on what’s happening around the rest of the UK too. After hearing many a good thing about the Michelin-starred Fordwich Arms in Kent (which Grace Dent gave a gushing review to last year) we finally made it down there on the last sunny Saturday in March to see what all the fuss was about.

First off, The Fordwich Arms has a fantastic setting; an old pub by the river with a beautiful outdoor terrace and pub garden. It was bought by chef patron Daniel Smith and his wife Natasha Norton-Smith (who’s also the pastry chef) who refurbished the 1930s building into the very fine looking pub and restaurant it is today.

The Fordwich Arms might get classified as a ‘Michelin-starred pub’ which it is of course, but the food here is way more interesting and exciting than just posh versions of what you’d think of as pub grub. Daniel spent time working with Jason Atherton and then five years at The Clove Club and his cooking here at The Fordwich Arms is much more in line with the scope and ambition of those restaurants. In fact, our lunch here was better than any meal we ever had at The Clove Club (not that we didn’t like the CC mind – we just LOVED the Fordwich).

You can go for a la carte, short tasting menu, and an extended menu, and the week they have a very reasonable £35 set lunch menu, so if you want to check it out for less this would be the way to go. We went a la carte but as there were three of us we managed to cover a lot of different dishes and to be honest, picking highlights is pretty difficult – it was one of those meals where everything just worked brilliantly.

We do recommend you start with a poached Whitstable rock oyster, topped with caviar, apple & Kentish cider butter and a glass of the very local English pink fizz, the Canterbury Rose by Simpsons. From the starters there’s a duck liver parfait that’s light as air and served with clementine, Sauternes jelly, and warm doughnuts instead of the usual toast. It’s a stunner and now we’re wondering why all parfaits, pates and terrines aren’t served with doughnuts. The other standout starter had to be the applewood grilled Scottish langoustine with ham hock cauliflower and apple – a brilliant dish.

From the mains came two lamb cutlets, plus a slither of belly, Jerusalem artichoke cream and crisp potato – one of the best dishes of the day – plus Cornish turbot with white asparagus and wild garlic. Desserts, courtesy of Natasha, were all absolutely beautiful too. Rice pudding with set cream, Bramley apple & crumble was a perfect marriage of two of the best desserts out there (apple crumble and rice pudding) but the winner might have to be the white chocolate tart with strawberry sorbet, which was actually pretty stunning.

In case you couldn’t tell we were big fans of The Fordwich Arms. It’s an easy journey on the train from London and there’s plenty to do around the area if you want to make a full day / weekend out of it. Whatever excuse you need, make it and get down there quick.