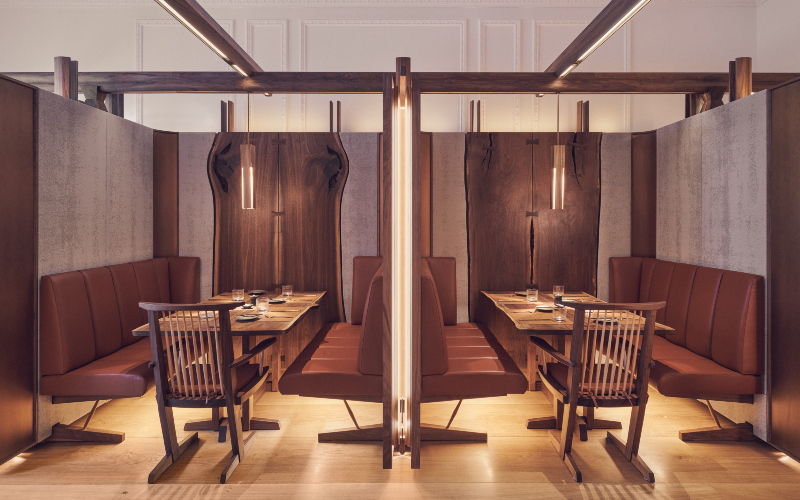 Originally opened in 1955, the Connaught Grill was once one of London’s most celebrated restaurants, but it eventually fell out of fashion and closed in 2000. It’s now been bought back to life in an entirely new guise, reborn as a smart, modern restaurant overseen by Jean Georges Vongerichten, who already has his ‘Jean-Georges’ restaurant at The Connaught. It actually briefly opened its doors in March 2020, but we all know what happened next, and now it’s finally fully up and running.

When you think of a ‘grill’ restaurant you might imagine a grand open dining room with lots of tables, noise and bustle, but The Connaught Grill is an altogether different proposition. Having taken over what was previously an events space (rather than its original location), the Connaught Grill 2.0 feels almost like a smart speakeasy, reached via an unmarked door and with a small, intimate feel. Tables are wrapped around with big dividers which give lots of privacy and block sound from neighbouring tables, so you can really cocoon yourself away here.

Just as the interiors are a modern interpretation of the classic grill, so is the food menu – familiar but with enough contemporary flair to keep things interesting. We skipped the raw section of oysters, caviar, and beef tartare and went straight into the starters; an exceptionally good homemade Scotch egg, with a perfectly runny yolk and a truffle mayonnaise that practically had us licking the plate clean, and a beetroot carpaccio, a beautiful spread of colourful beetroots both in wood-roasted chunks and cured thin slices, served with chilli aioli and avocado.

We’d already spied a whole chicken on the rotisserie grill when we walked into the restaurant and after it was mentioned to us as one of the signature dishes, we ordered this to share as our main. There’s plenty else to tempt you though, from Kobe beef and Welsh lamb to Dover sole and Scottish lobster. The organic chicken from the Loire valley is carved table side, the juicy meat and crisp skin falling off the bones. It comes with a rich chicken gravy and we also added a side of potato rosti with wood grilled English asparagus.

In true classic grill style, crepe suzette prepared at the table is the signature dessert, and we saw lots of trolleys being rolled out to other tables during our visit. For us though, we can never turn down a sticky toffee pudding so we went for that for dessert, along with a glass of sweet Tokaji.

We absolutely loved this re-invention of The Connaught Grill – it’s a smart, crowd pleasing restaurant that pays just enough respect to tradition while still making it feel relevant for today. We’ll be back again soon for sure.