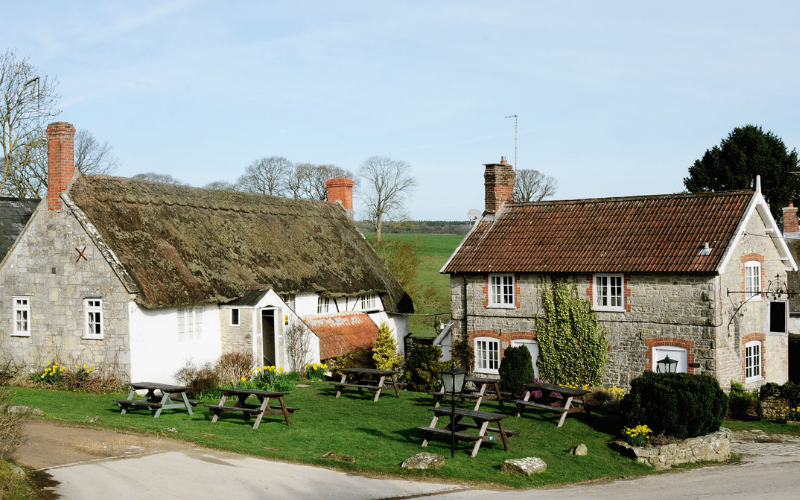 If you find yourself taking a road trip to Devon or Cornwall or that neck of the woods and you’re looking for the ideal lunch stop, then we have just the place for you – The Compasses Inn. This Wiltshire pub in the little village of Lower Chicksgrove is owned by Ben Maschler (son of legendary restaurant critic Fay Maschler) and is perfectly positioned between London and the South West, just a short detour from the A303.

The pub itself is one of the oldest in the country, dating from the 14th century, and unlike some of the other venues that claim such heritage, The Compasses actually looks the part, with low ceilings, gnarled wooden beams, flagstone floors, a big brick fireplace and many a dark cosy corner. It’s full of charm and character and on the Friday lunchtime we visited, it was absolutely packed with locals lunching.

The food too is superb and far better than anyone would have the right to expect from an unassuming country pub very much off the beaten path. Head Chef Paddy Davy has produced a wonderful menu of traditional pub fare, executed extremely well with local produce and accomplished touches. Case in point: an exemplary crisp, golden Scotch egg from the bar snacks menu to kick things off.

Moving on to the starters, we enjoyed the local Chicksgrove beef and bacon on dripping toast with horseradish creme fraiche, and a meaty pork terrine with spiced oranges, salad and toast. A small but significant point of commendation on the terrine, which came with a huge fistful of cornichons. So often you’ll get a terrine served with a measly three cornichons so we were very happy to see this common restaurant failure addressed so generously here.

A superb fish pie, with a smooth buttery topping of mashed potato and a rich creamy filling of juicy fish came next, along with The Compasses’ homemade burger, enlivened with green chilli cheese, adobo sauce, and pickled jalapeños, plus some epic chunky chips on the side. We sadly didn’t have time for dessert before hitting the road – but if we had, we most certainly would have been all over the Spotted Dick with Bird’s custard ice cream and the sticky apricot, date and walnut pudding. Next time!