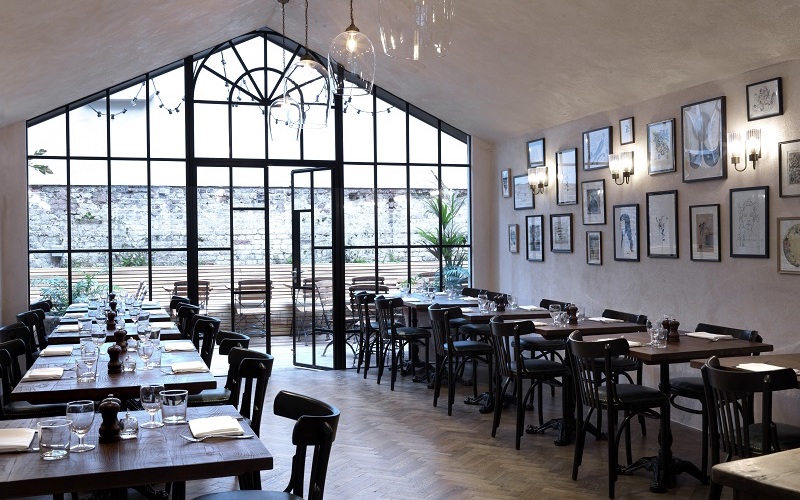 Henry Harris closed his much-loved restaurant Racine a few years ago, much to the dismay of restaurant critics and his many other fans, and since been busying himself with a variety of pop-ups, residencies and events. But now he’s properly back as Chef Director of Harcourt Inns, who have opened Three Cranes and The Coach so far, and have The Hero of Maida (formerly The Truscott Arms) opening at the end of April.

We’d heard particularly great things about The Coach so went down to check it out for dinner. It’s still got the classic pub feeling when you enter (it used to be The Coach and Horses) but it’s been given a nice lick of paint, and the rear dining room complete with glass wall leading out to the garden, is a real beauty.

The menu is Harris’ trademark mix of British and French and we kicked off with a pig’s head terrine, served with thin slices of crispy pig’s ear, plus some mixed charcuterie just to complete the piggy picture. Then there was beautiful chunks of smoked eel mixed with horseradish, bacon and beurre blanc.

Mains bought more pork and possibly our favourite dish of the night, a juicy slice of Middlewhite shoulder with bubble and squeak and cider jus – oh and some extra chips on the side. For something less meaty but no less satisfying, try the roast gurnard fillet in a fennel and tomato broth with a little dollop of creme fraiche on top. Desserts were mercifully on the lighter end of the scale so it was no problem to polish off a lemon posset and a fresh meringue with rhubarb and a negroni syrup.

The Coach has classy pub dining pretty much nailed and come summer when that garden door is open right into the garden, there’ll be not many better places to be in Clerkenwell.